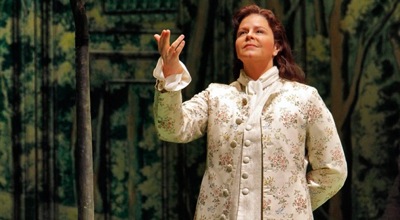 The company premiere of Xerses at the San Francisco Opera was the highlight of this operatic season for this particular member of the audience – and, from what I have read and heard, also for many critics and opera lovers. Visual and musical elements all functioned together to create a truly entertaining and artistically solid work.

The production that the SF Opera presented was the Olivier Award-winning staging by Nicholas Hyrtner, with Michael Walling as revival director. The action takes place in a replica of the Vauxhall Pleasure Gardens that, in Handel's time, were at the center of London's aristocratic life. The Gardens were a place in which Neoclassical architecture fantasies, exotic fascination and 18th-century imperialism mixed, through the material presence of artefacts, everyday objects as well as botanical experiments from both Europe and Asia.

The Pleasure Gardens are the set of tyrant Xerses' power games, but they are also the space for a reflection of camp culture, visual and emotional excess, and boundary-crossing. Not only is there an intricate interplay of cross-dressing roles in every Baroque opera production, but, in this case, is there also a complicated dynamics of temporal-crossing, with references to both Handel's and King Xerses' times, as well as to more contemporary milieux and spaces. As Patrick Summers remarks in his production notes, "This is the genius of Nicholas Hytner production: precisely as Handel did himself, he allows the ancient to inform the modern, for we are most definitely in three different worlds when viewing a Baroque opera. We are in the time of the opera's composition; we are in the historical time of the characters, which is inevitably much older (Xerses' libretto dates from the early seventeenth-century, almost a century before Handel wrote this opera); and most importantly, we are viewing the work through the prism of our own lives and experiences here in the twenty-first century." 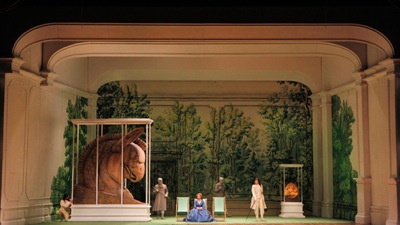 The vocal standard of this Xerses was incredible, and it was consistent throughout this physically-demanding opera. Susan Graham was a joy to watch and to hear: she delivered her lines with boldness, majesty and precision, highlighting both the most delicate and the most tyrannical aspects of the Persian king. Her performance was practically flawless: hearing her delivering such complex ornamentation for over three hours made her seem super-human.

Counter-tenor David Daniels portrayed a warm and humorous Arsamenes, with his smooth and mellow timbre. While in a few moments he somewhat lacked precision, his performance was overall solid and he played skillfully with the embellishments of his part.

Arsamenes' beloved, Romilda, was created by a stunning Lisette Oropesa: it was a surprise for me to witness how precise and smooth her soprano timbre is. She held complete control of her instrument, and her pianissimo lines were especially moving. Together with Graham's, her vocal performance was, for me, the highlight of this Xerses.

As Romilda's sister Atalanta, Heidi Strober was similarly impressive. She gave life to a strong-willed, astute character through her subtle interpretation: her powerful tone and the humorous way in which she delivered her lines and the ornamentation were memorable. During her number "Un cenno leggiadretto," in which Atalanta reminds us how women can easily make men fall in love, the lights of the auditorium went up and the audience became part of the scene. This device is used later in the same production, and has been exploited also during the recent Don Giovanni. While perhaps the audience might become accustomed to this type of meta-theatrical strategies, I think such devices still offer a powerful moment of reflection that can assume different nuances according to the opera in which it is employed. 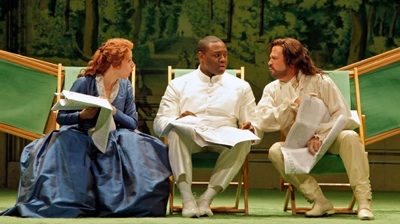 Sonia Prina also created a powerful Amastris. Her technique is not entirely convincing – for instance, we could clearly hear her take perhaps too many breaths during her arias. On the other hand, her numbers – especially the first one – are among the most technically challenging of the opera and, nonetheless, her articulation and intonation were always precise. Also, her acting skills are remarkable, and her Amastris was a truly convincing character. Michael Sumuel, too, was superb as Elviro: his intense bass-baritone timbre was perfectly suited to the part, and his acting was always precise and amusing. In fact, apart from the consistency in their performances, another characteristic that made this cast a harmonious ensemble was the ability of all the singers to bring to the fore the ironic quality of Xerses' score – both through their voices and their acting.

The orchestra, conducted by Patrick Summers (also playing the harpsichord together with Jonathan Kelly), sounded brilliant and always in harmony with the singers. Baroque specialists joined the SF Opera orchestra, and the result was outstanding, with a lively pulse always beating throughout the opera.

I could only attend one of the last performances of this Xerses, and I am very glad that I managed to experience this production. Tonight is the last night of this successful run, and I hope as many people as possible have been able to attend this exceptional musical enterprise.