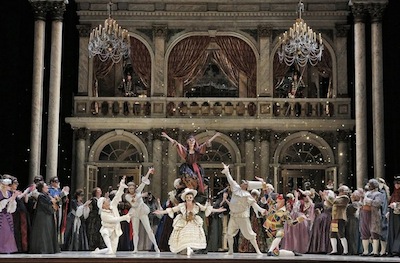 The numerous contrasting dimensions of Verdi's Un ballo in maschera – the personal and the political, the secular and the sacred, the comedic and the tragic – were brought to the fore at the War Memorial Opera House for this San Francisco Opera's revival, thanks to an elegant and passionate orchestral rendition and excellent vocal performances.

If this San Francisco Opera revival of Un ballo (created for the Washington National Opera) remains a pretty conventional and somewhat uncreative production, I believe it serves this opera well. In every scene, the space on stage is intelligently shaped by columns, staircases, and other architectural elements so that a wider sense of perspective is enhanced while at the same time not dwarfing the performers. The clever use of space, enhanced by the play of light and shadows, was due also to the creative lighting designed by Gary Marder. Costumes by John Conkling appeared somewhat dated – too much fabric and too many colors at times, especially during the final scene, when the stage is crowded with people attending the masked ball and the cumbersome costumes become distracting and unhelpful to the action. Jose Maria Condemi's direction was efficient – in particular, I appreciated the numerous tableaux-like scenes ending Act I and Act III, choreographed with great beauty and grace.

Vocally, this SF Opera's Un ballo was a success. RamónVargas' lyric tenor is always pleasant to hear. Riccardo (or Gustavus III, in original version that was censored during Verdi's time) is one of his signature roles, which he has sung for many years all over the world. As Vargas himself remarked during an interview to MusicalCriticism.com, the King of Sweden “is nice, a little bit superficial perhaps, but very honest and noble. He makes mistakes and tries to correct them.” Vargas' interpretation certainly brought to the fore the contrasting aspects of the king's personality: his legato is delicate and always precise, and his timbre is warm and mellow – characteristics which sometimes make his voice prone to being overpowered by the orchestra. It's a shame that acting is not Vargas' best asset, and his portrayal suffered from a somewhat dramatic stiffness and lack of charisma. 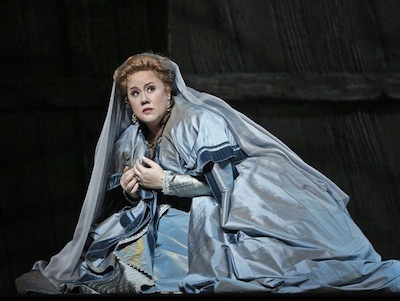 Julianna Di Giacomo's debut as Amelia was magnificent. Di Giacomo – a 1999 graduate of the Merola Opera Program – shone from the moment she sang her first lines, trying to forget her love for Riccardo by means of magic, to the end, attempting to instil compassion in her husband Renato (“Morró, ma prima in grazia”). Her entrance in Act II – at night, in a tenebrous, lonely field – was explosive: her beautiful, warm, crystalline and, at the same time, powerful timbre filled the whole – and otherwise bare – stage.  I look forward to witnessing many more of her Verdian roles in the years to come!

Brian Mulligan, replacing Thomas Hampson during some of the performances in this run of Un ballo, gave life to a convincing and incredibly passionate Renato (Count Anckarstrom). His vocal performance wasn't homogenous, and towards the beginning he struggled to achieve evenness in his timbre. Once he warmed up, he offered an intense performance. His heartbreaking “Eri tu... O dolcezze perdute” was one of the highlights of the night, for this member of the audience, not only from a vocal point of view but also because of the urgency carried by his dramatic interpretation. Thanks to both Mulligan's and Di Giacomo's performances, the whole first scene of Act III was a masterpiece of intensity.

Dolora Zajick was fantastic – as always – portraying the mysterious, powerful storyteller Ulrica. Constantly in perfect harmony with the orchestra, her round, intense, and graceful voice filled the auditorium. What a joy to see and listen to her perform!

The dramatic engagement was equally strong from the comprimario singers. Heidi Stober was a fabulous Oscar, both in her acting and in her vocal performance. She is a wonderful interpreter of this peculiar Cherubino-like character: her tone is bright her singing is precise, and her performance was entertaining and lively. Efraín Solís' Silvano (Christian), one of the fishermen interrogating Ulrica about his future, gave a vocally excellent and spirited performance, as well. Christian Van Horn and Scott Conner, as the two conspirators, also portrayed their characters with great vocal precision and effectiveness.

After five years that I have been attending the San Francisco Opera, music director Nicola Luisotti's interpretation of the Italian repertoire never failed to impress, to these ears in any case. The play of contrasts, the fullness and the silence, and the intensity of the drama to come, were all present in the overture. Luisotti's choice of long pauses at the end of Act II, when Amelia's identity – and hers and the king's betrayal – are revealed to her husband – made the scene superbly poignant. As the opera went on, the ambiguous and intense aural colors of the story unfolded in the orchestral interpretation – from the delicate, almost fragile, lines of the strings to the vigour of the full orchestra. Whether you are a Verdi lover or not, this Ballo is not to miss.