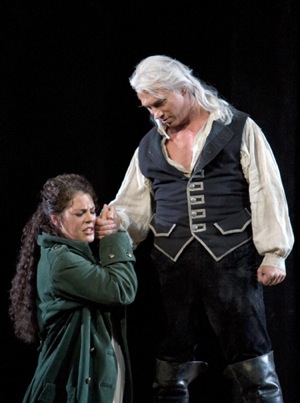 This year's opening of the season at the San Francisco Opera was a special occasion: the debut, no less, of the new Music Director, Nicola Luisotti. Luisotti specialises in nineteenth- and twentieth-century Italian opera. Il trovatore, a work that has been in the repertoire of the Opera since 1859, was Luisotti and his artistic team's choice to inaugurate his tenure. And in this 2009 incarnation, the opera represents an outstanding beginning for this new partnership.

A nightmarish simplicity haunts David McVicar's conception of Trovatore. This co-production with the Metropolitan Opera and Lyric Opera of Chicago demonstrates the way an unobtrusive staging can well serve an opera that presents formidable scenic difficulties. McVicar decided to update the action from 1409 to the Spanish War of Independence against Napoleon. His reasons are interesting, and he explained in an interview with The New York Times: 'What guides me is that the period must work musically. The early 19th century fits with Verdi's tinta, the dark palette he creates for Spain'.

McVicar also declared that he and his team drew inspiration from Francisco Goya's series of paintings Los Desastres de la Guerra, created between 1810 and 1820. Their achievement is undeniable. The rotating set, designed by Charles Edwards, accommodates the frequent change of setting in the plot: with only a minimal number of variations, they manage to create multiform spaces exploiting different chromatic shades and movable elements. The overall result is somehow both elegant and menacing, with geometric elements (steep steps, the iron grates of a dungeon) defining the space and conferring dark, disquieting tones to the action. The mechanical changes of scene were never distracting: when Di Luna and his men burst in during the finale of Act II, the cloister's wall that formed the background moves slowly to the left in order to leave space for the inside of the building, the nuns' chanting becoming more and more perceptible as we are led in there. 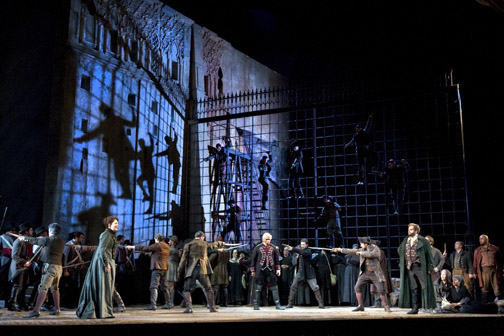 Painterly qualities redolent of Goya were especially evident during the crowd scenes. In particular, again at the end of Act II, when Di Luna and his soldiers are surrounded by Manrico's men, the latter attach themselves the convent grate and point through at di Luna. Then, as the singing continues, with Di Luna, Manrico, and Leonora each expressing their own reaction, immobile figures congregate around them – both soldiers and their shadows on the wall contributing to the tragic atmosphere.

Together with practical and expressive staging, the defining characteristic of this Trovatore was its outstanding vocal standards. Sondra Radvanovsky's Leonora occasionally suffered from fast vibrato and an excessively mechanical tone, not complemented by a dose of impulsiveness always needed in the role. Yet she mastered some tremendous messe di voce, and apart from a certain lack of timbre in the lowest tessitura, her rendition was superb. In particular, the acrobatics she displayed during her 'D'amor sull'ali rosee' were phenomenal: dressed in white against the nightmarish background of the dungeon grate, she seemed transfigured into a non-human space. 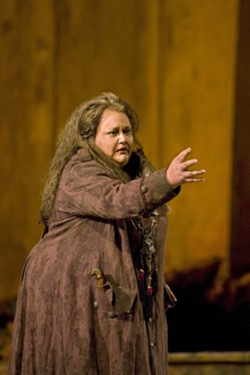 Dmitri Hvorostovsky's Conte Di Luna followed a different trajectory. The Russian baritone seemed at the beginning to have underestimated the dramatic charge of his role. Hints of weariness were evident – fine, perhaps for his Onegin, but working against the portrayal of this fiery and restless aristocrat. And yet by the time of 'Il balen del suo sorriso' he found the centre of the role: an elegiac figure that transcended the ignoble aspects of his character. His voice was suave and precise, and he was even able to express a sort of charming naiveté. Admittedly, a slight self-indulgence is probably the signature of many of his operatic roles; but there his expressiveness conquered all, making Di Luna impossible to dislike.

However, not even the Russian baritone was able to steal the stage from the real heroine of this Trovatore – Stephanie Blythe. Verdi, who wanted Azucena to be the burning and traumatized heart of the opera, would surely have approved of Blythe, whose Azucena was above all ruthless in her desperation. Her first narrative aria, in which she tells of the story of throwing her own child to the stake instead of the son of her mother's murderer, was a masterpiece of precision and intensity. Blythe's mastery of her vocal range is unique: the passage from the low tessitura to her mother's cry, 'Mi vendica', haunted the entire performance.

Marco Berti was a bold and dynamic Manrico, but his vocal characterization was somewhat monolithic and at times even vulgar, owing to a lack of refinement in the more delicate moments.

Comprimario singers were nicely cast. In particular, Burak Bilgili as di Luna's officer Ferrando was able to mesmerise his on-stage audience – Di Luna's soldiers – while anticipating the gypsy's sinister story, during the first narrative of the opera. His ability as a narrator was evident also in the first scene of Act III, when he announces to Di Luna that Azucena has been captured. 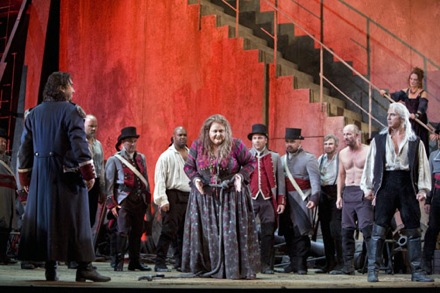 Nicola Luisotti was cheered excitedly by both public and performers – the sign of a wonderful marriage between the San Francisco audience and its new Music Director. Yet, he could have exploited more powerfully the colours represented in Verdi's score. His reading was elegant and delicate – too delicate at times, preventing the gathering of emotional power.

On the other hand, Luisotti has the merit of having created wonderful chemistry with his new team. In an interview with Dominic McHugh, the new director referred to the joy of being able to build on regular work with the orchestra: '[...] you have the same orchestra every day, the same people every day: you can really spend your time creating something then!'

Thanks mostly to an outstanding cast and inspired staging, this Trovatore was a great achievement. It is difficult to imagine a more successful start of the season for the San Francisco Opera at the beginning of a new moment of its history.