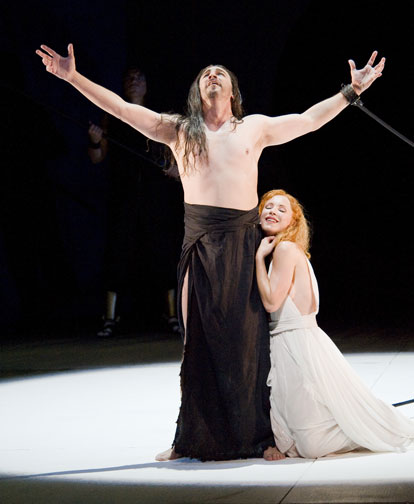 It was a powerful performance that the San Francisco Opera brought on stage with Salome. Nicola Luisotti took up the challenge to give life to one of the most shocking Biblical stories as imagined by Oscar Wilde and Richard Strauss. And, if not consistent in all its elements, this Salome was an intense spectacle with many memorable singing moments supported by a vivid orchestral rendition.

As the audience took their seats, the curtains were already open. Spectators had time to familiarize themselves with the minimalist mise en scene by Bruno Schwengl before the clarinet started its first uncanny scale of Strauss' piece. Herod's guards were patrolling the space on stage while, in the pit, a peculiar, prolonged tuning took place: the instrumentalists were creating a disharmonious soundtrack that matched the eerie atmosphere on stage.

I noted that the audience was given the chance to familiarize itself with the space in which the action unfolds. Yet, this is not the most appropriate term for a work saturated with uncanny motives. In a recent conversation reported in the programme notes, Luisotti commented on some of the most striking qualities of Salome: not only are many of the characters voyeurs, but this opera more than others 'makes us voyeurs, which in secret we might like, but to admit is uncomfortable. […] It's a private opera; everything happens in one room'.

Voyeurism and gaze were certainly themes explored in this production. The set was a sombre box-like space recalling a darkroom. This photographic parallel was amplified by the door of the prison from which Jochanaan appears: an oversized camera lens. This reading is consistent with the lingering on images of gaze present in Oscar Wilde's play, the source from which this opera draws most of his textual material. 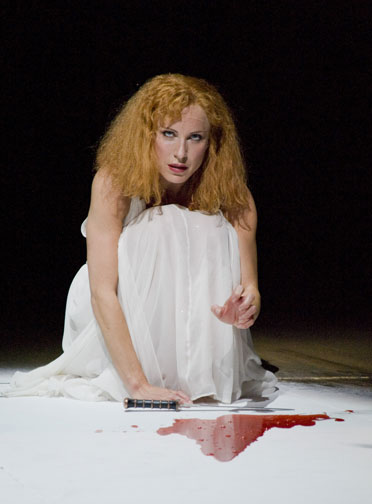 Director Seán Curran made good use of these elements: having moved from choreography to stage direction, he conferred to this production a coherence made of gazes wittingly choreographed. At times the minimalist, bare staging seemed not to serve the many layers of the opera. Yet, the staging managed to assume consistent connotations precisely because of the way the characters inhabited it. In particular, in the first scene the narrative, tension was conveyed through proficient and intense singing by Garrett Sorenson (Narraboth), Elizabeth DeShong (the Page) and by the interactions of body and gaze between the characters.

What really made the theatrical space come alive was the presence of Nadja Michael in the title role. The audience, together with the characters inhabiting the drama, first saw Michael's Salome in a flowing, virginal white dress, which clashed with the provocative way she swung around the guards, giving life to bodily and vocal patterns. She portrayed a whimsical and manic teenager. Unfortunately, her high tessitura is still a bit strained. This aspect of her singing should improve as she continues to transition from mezzo to soprano.

On the other hand, her physicality helped her in the construction of a fierce character. Even when not singing, she functioned as a catalyst for narrative tension – for instance, when she was sitting immersed in her thoughts, by manically touching her hair. Her making love to Jochanaan's head at the end of the drama was a masterpiece of morbid intensity.

Shape patterns – oval shapes in particular – were a strong motif in this production. Both the main entrance at the left of the stage and Jochanaan's prison were round-shaped; and Salome could penetrate the prophet's prison through a round opening. Moreover, the moon, whose image permeates Wilde's text, was a big circle of light projected on the stage, and to which Salome seemed to be attracted. Like a moth, Michael's Salome delivered her lines swaying around the circumference of this aseptic and omnipresent moon.

Powerful moments certainly included those featuring baritone Greer Grimsley. He aptly exploited all the colours of his role. His Jochanaan was an imposing presence on stage, and his timbre and vocal precision conveyed nobility and moral steadiness, together with a sense of endured suffering, which befits the portrayal of this character. 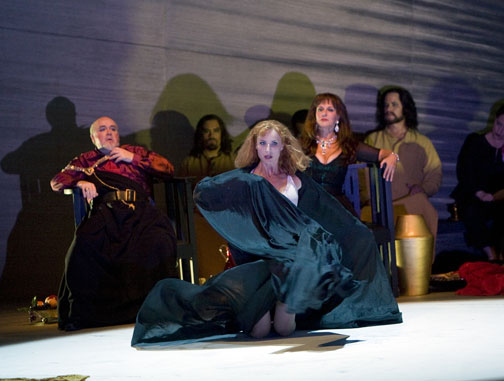 Kim Begley's Herod wasn't equally convincing. Although elegant in his phrasing, he was often surmounted by the orchestra. His Herod was a red-blooded pathetic man, and his ineptitude was manifested well in his relationship with his step-daughter, who seemed almost to intimidate him.

On the other hand, I felt he could have exploited more the interaction with Salome: in this regard, his portrayal came across as somewhat weak. This was not the case for Herodias, Salome's mother: through her precise and violent singing, Irina Mishura portrayed a powerful and scornful character.

This was the first time Luisotti conducted this opera, but I found his reading of the score a generally convincing one. From the pit, the conductor and his musicians created a harmonious oscillation between vigorous outbursts of sound and of pianissimo lines.

There were a moments, though, in which I wished Luisotti would push more to the extreme the depth and colours of Strauss' score. One of these moments, perhaps, was the Dance of the Seven Veils. As Salome dares to fulfil the lustful desires of her step-father to get what she desires, Luisotti could have dared to venture into subtler shades of the musical fabric. Incisiveness was the missing ingredient in some moments. Yet, as I noted above, it is evident that Luisotti engaged with Strauss' score from a passionate and knowledgeable perspective.

As my friend noticed after the performance, we are lucky to take our seats at the opera house knowing pre-emptively of Salome's necro-nymphomaniac whims and of the way Strauss gave musical shape to them. His work has not lost its shocking qualities, but it is each company's responsibility to bring the intensity of the score alive. This San Francisco Opera Salome had the potential to become a truly powerful interpretation, but some elements are not totally convincing. Nonetheless, thanks to some thrilling vocal renditions, and to Luisotti's fiery reading of the score, this one is a Salome worth catching.