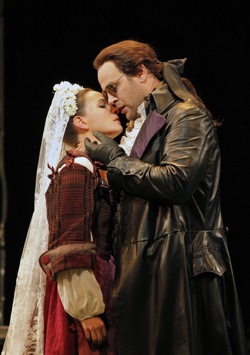 During act II of Don Giovanni, the unrepentant seducer escapes from an unwanted confrontation with an ex-lover, Donna Elvira, thanks to the help of his servant Leporello, who is wearing his master's clothes in disguise. Don Giovanni is then free to serenade Donna Elvira's maid under her window. In this new San Francisco Opera production, directed by Gabriele Lavia, the maid never appears. More than that, for the second stanza of his song, Don Giovanni (Lucas Meachem) makes his way to the forestage and sings directly to the audience. This is not a traditional showcase of the singer's ability, but a real engagement with the people in front of the stage: the lights of the opera house go up as he starts his sottovoce "Tu c'hai la bocca dolce più del miele" (O you, with your mouth sweeter than honey).

Don Giovanni's desire is not fulfilled (nobody is there to reciprocate his serenade), and from then on, he is left to face one failure after another, until his death. Yet, in that moment in which we were the objects of his cunning vocal attentions, I felt that we were transported into the drama – as the auditorium became part of the onstage realm – and forced to surrender to Meachem's beautiful singing. "Is this what Don Giovanni's victims feel?," I found myself asking.

This was the power of a new production that, at its best, conveyed a sense of disturbing inclusiveness. In other moments, there was a sense of frustration, at times of missed opportunities. I am thinking mainly of the set designs by Alessandro Camera. The stage was defined by twenty-two hanging, transparent mirrors that moved up and down to create different spaces. The problem with mirrors in opera is that they function better in theory than in practice. Filled with infinite connotations, when they materialize on stage they can be disappointing because they fail to deliver their promise: neither the audience nor the characters were consistently reflected, contrary to what one can see in the beautiful production photos, which, unfortunately, portray only a fantasy. On the other hand, I appreciated the loose sense of space that the mirrors created, and the fact that they were not distracting (although that would depend on where one was seated), serving primarily as imposing dark frames to the drama played out in front of them. In the few occasions in which they did reflect the characters – especially when they were at the stage level, instead of hanging in mid-air – the effect was mesmerizing.

The rest of the stage was populated by Rococo chairs, and other furniture and object d'art varied with every scene: a big bed for the first scene, partially hidden among the transparent mirrors (here they functioned well), a majestic dining table, and so on. In some cases, actors functioned as part of the setting, too. This happens, for instance, when servants move around a fainting Donna Anna, holding branched candlesticks and creating a beautiful choreography in the dark space. There were also surreal elements, such as the stage surface itself – covered by a green lawn that assumed different shades according to the lighting (by Christopher Maravich).

At the final dinner, the setting suddenly became rather imposing: an enormous burgundy U-shaped curtain was there as a backdrop. The shameless opulence of the scene made for a ravishing setting of Don Giovanni's fatal act of defiance. 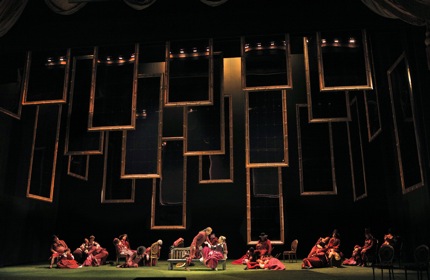 The social implications of this opera – namely the different status of aristocrats and peasants – were addressed by Andrea Viotti's costumes (or, at least, that was my interpretation). The period costumes were given an interesting bent: Don Giovanni's outfit, in particular, could be that of some techno-Matrix chic, with a long leather jacket, knee-length boots, and dark sunglasses. In sharp contrast, the peasants were dressed in a majestic burgundy red, a cynical reversal of their subaltern position.

Lavia's direction was subtle and effective thanks to the impressively cohesive movement of the cast. Some ensemble scenes created an uncanny, voyeuristic space: during Zerlina's "Batti batti o bel Masetto," the peasants were in a drunken sleep, entering in and out of their slumber precisely to witness the pivotal moments of what flourishes into a love scene. We, the audience, also occupied a disturbing position at the end of Act I: many of the guests in Don Giovanni's villa had their backs turned to us, leaving us as quasi-voyeurs (or unwanted guests) of the scene.

A further interesting choice was that of Don Giovanni's prop: he was armed not only by his sword and his voice, but also by a white handkerchief. With that, he would completely cover the face of the woman he was pursuing. I found this detail disturbingly effective. (It also reminded me of Magritte's The Kiss, but I'm not sure whether the director would agree [see interview with Lavia]). The handkerchief also became a metaphor for Don Giovanni himself in several scenes, especially – and with parodical undertones – when exploited by Leporello.

If, because of the directorial choices, men seemed to prevail (with an important exception that I explore below), vocally the cast was even. Meachem's Don Giovanni seemed, at times, a little stiff in his delivery and his baritone timbre could have been more powerful. Once he warmed up, however, he delivered his lines with great agility and expression. Coupled with his persuasive, charismatic acting, his interpretation proved successful. 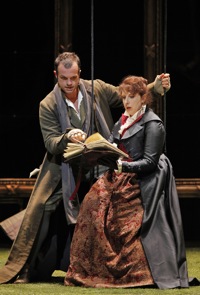 Marco Vinco, as Leporello, did not project as one would expect, especially at the beginning. Yet his phrasing was pleasant and precise, and he acted wonderfully. His harmonious and cynically comical interaction with Meachem's Don Giovanni contributed to the success of the whole performance.

Serena Farnocchia portrayed a soulful and warm Donna Elvira. Even if she was not always precise in her delivery, her recitativi were a pleasure, as was her confrontation with Zerlina, as she begs the young woman not to succumb to Don Giovanni's courtship.

Ryan Kuster's Masetto had some qualities similar to those of Farnocchia's. His sombre and intimate timbre worked very well for his character, as did his physical presence. Through his interpretation, he also managed to give a voice and a body to the frustration of a peasant who cannot but surrender to the shameful wishes of a member of the higher class.

Shawn Mathey gave life to a very elegant Don Ottavio, and his timbre had a sweet chamber quality. His acting wasn't always convincing, but that's understandable, given the short notice by which he replaced Topi Lehtipuu. Ellie Dehn was a strong yet tender Donna Anna, with her shiny, piercing timbre. Unfortunately, her interpretation was the one that convinced me the least: in her big numbers, her delivery was rather imprecise, especially in the high tessitura. Elvira's father, the Commendatore was a strong and intimidating character, thanks to Morris Robinson's passionate rendition.

For me, Kate Lindsey as Zerlina offered the most beautiful performance of the evening. She was in command throughout, both vocally – with her bright but intense mezzo timbre – and physically. Thanks to Lavia's direction, she was also the only one who could counterpoise a genuine, somewhat blazing sexuality to Don Giovanni's violent statements (and also to the other women's more conventional characterization). The staging of "Batti batti o bel Masetto" was refreshing: instead of acting humbly, pretending to be actually "beaten," and leaving the cunning elements to the audience's interpretation only, this portrayal of Zerlina created a space in which she could explicitly play with her sexuality. I've always been shocked by the violence of the Italian text, and I felt that in this case Zerlina became more of an agent of her desire rather than merely succumbing to Don Giovanni's. The disruptive potential of Zerlina is reinforced by the fact that she is the only female character who violently grabs Don Giovanni's handkerchief off his face, thus assuming control of the situation. 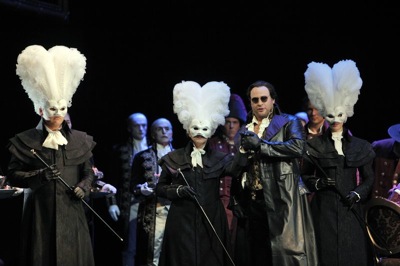 Nicola Luisotti decided to leave out the moralizing epilogue of the opera, which proved to be an effective choice, given the predominance of dark elements in this production. Luisotti's commentary on the fortepiano provided for some imaginative, comical moments. What I found difficult to understand were some of the choices of tempi. The whole first act (in particular, Don Giovanni's "Fin ch'han dal vino") was generally rushed. Perhaps this might have been the cause for the lack of coordination between stage and pit, which occurred more than once. On the other hand, the expressive power of the score was brought to the fore with heightened intensity, and I sense that the coordination problems will be easily solved along the run.

There are limits in the conception of the set designs, as well as some issues on the musical side, and yet, I think this is a truly enjoyable spectacle because of the plurality of views it inspires, thanks to the artistry of the singers and the creative team. A production such as this one reminds us of the imaginative legacy of Don Giovanni, an opera that continues to intrigue, charm and disturb the imagination of so many.