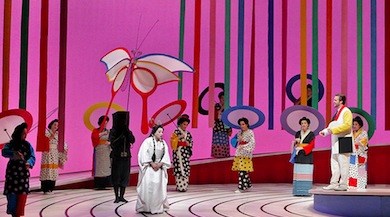 Together with La bohème, Madama Butterfly is the opera that is most performed at the War Memorial Opera House. This particular run is not to be missed, thanks to the captivating production by Jun Kaneko (new to the SF Opera), the intensity of the acting, and the masterful vocal qualities of the cast members.

I often find myself having some prejudice when going to see certain operas by Puccini – in the case of Butterfly, because of the often stereotypical portrayal of Japanese culture which can appear as blatantly racist to a contemporary audience. As Gavin Plumley remarks in his program notes, “the kernel of the tragedy is ethnic misconception, which operates both on the surface and within the structure of Puccini's opera.” Nonetheless, the production by Kaneko – co-produced by the SF Opera together with Opera Omaha (where it premiered in 2006) – confers to the whole drama a level of subtlety, grace, and liveliness. Primary colors and neatly defined oval and square patterns are omnipresent in the architectural pieces, in the costumes, and in the props. Together with the video projections and with the lighting designed by Gary Marder, all these elements lent the space a dynamically harmonious atmosphere with melancholic overtones. 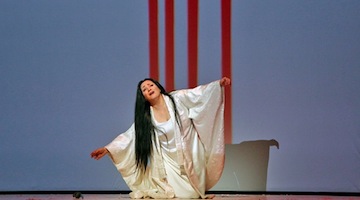 Patricia Racette is a majestic, regal Cio Cio San. Racette portrays the 15-year-old geisha in a manner that is both delicate and vigorous. In the past few years, she has given life to this role in major opera houses worldwide, and she is completely comfortable playing Puccinian heroines. Her timbre is powerful and intense, from the low tessitura to the highest lines. While the libretto wants us to believe that Cio Cio San is ingenuous and – to put it simplistically – in denial regarding her relationship with an opportunistic Pinkerton, the puissance in Racette's interpretation made her the real center of attention both for the characters on stage and for the audience. Moreover, Racette's acting was subtle and touching, especially portraying the bonds with her son Sorrow with and her beloved maid Suzuki.

Tenor Brian Jadge created an incredibly commanding Pinkerton. With his charming spinto timbre, he could deliver his lines with so much puissance and clarity – and, at the same time, with ease and suavity. Despite the anti-hero qualities of his character and the perversity of his actions, his singing was something to look forward to every time he was on stage.

Mezzo-soprano Elizabeth DeShong was yet another highlight of the performance. She seemed to be able to envelop the whole orchestra with her deep and warm timbre while projecting her lines. She managed to portray a Suzuki who was full of affection and respect to her Butterfly, but could also convey firmness and severity – both towards Butterfly herself and towards the men who acted as her antagonists (Pinkerton, Sharpless and Goro). 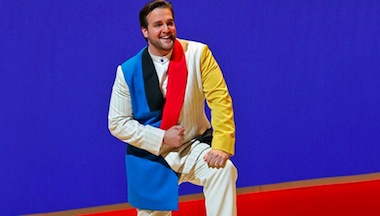 Brian Mulligan's Sharpless was a strong and multi-dimensional character – stern and cold when giving advice to his compatriot Pinkerton, realistic and compassionate when conversing with Suzuki. He could always be heard even when the orchestra played at its loudest; and at the same time his voice melted harmoniously with the rest of the cast. Julius Ahn, as Goro, possessed the lighter voice amid the rest of the cast, and at times it was difficult to distinguish his lines. Still, he was very expressive, both in his vocal delivery and in his acting.

What made this Butterfly tremendously strong was the beautiful balance and harmony among all the main characters. The duets between Racette and Jadge were memorable, as well as those between Racette and DeShong. One of the most poignant moments in the opera was the trio between Jadge, DeShong and Mulligan in Act II in which they find themselves confronting the consequences of Pinkerton's betrayal of Butterfly, each from their own perspective. The emotional and melodic development was sustained by an instrumental crescendo and the whole scene unraveled with great artistry and passion, in a moment of heartbreaking intensity.

The chorus, directed by Ian Robertson, performed with grace and passion, and the orchestra, under maestro Nicola Luisotti, played with warmth and vigor. I was particularly impressed by the balance between the stage and the pit – something which was somewhat missing in the performance of La traviata that I attended the week before. This Butterfly is certainly a highlight of this summer season at the SF Opera – don't miss it.