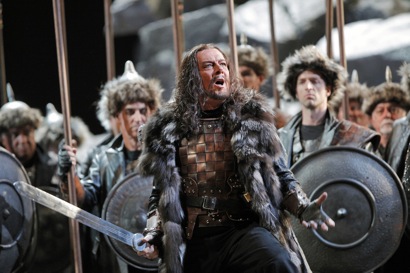 This production of Attila at the San Francisco Opera represented one of the most precious operatic experiences for this particular member of the audience. The singers displayed an exceptional level of harmony with one another and with the orchestra. Moreover, maestro Nicola Luisotti's passionate reading of the score revealed one surprise after another: he showed great care and respect for this Verdi opera – one that is usually said to lack the subtlety of the composer's most mature works – and turned Attila into a masterpiece of Verdian expression.

Director Gabriele Lavia, returning to San Francisco after a successful Don Giovanni, conceived Attila as a commentary on the destruction of culture in three different periods: Attila's historical time (5th century), Verdi's time (19th century) and our own time, represented respectively by the ruins of a Roman amphiteater, of an opera house, and of a movie theater. Elements from all the different periods accumulated on stage rather than being replaced, so that by the third act all the three epochs inhabited the space. Although the sets by Alessandro Camera were functional and not invasive, the costumes designed by Andrea Viotti were confusing. For instance, in Act II, Attila was dressed as an Austrian general, but the rest of the costumes were almost ahistorical in their conception – dancers entertaining the Huns during a banquet wore witch-like outfits, while some of the guests were half-dressed as soldiers from an indefinite time, others as 19th-century aristocrats.

During Act III, a cinema screen was added to the setting. Mute excerpts from the film The Sign of the Pagan featuring Jack Palance as Attila were shown. The projections were at times distracting; yet, for this particular member of the audience, they were a welcomed distraction: this multimedia addition created a hallucinatory space that worked very well with the abruptness of the final act. In addition, the silent presence of the film in the background also reflected on the myth of Attila throughout the centuries and across media. 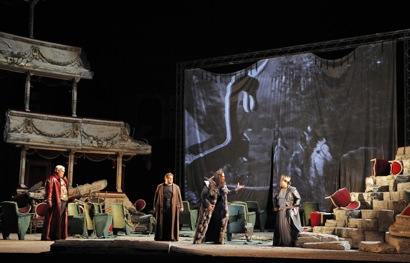 I found the action on stage to be efficient, although not very imaginative: it was characterized by repetition of gestures and poses. For instance, many of the characters delivered their big numbers in a statuesque position standing with one foot on various stone-like elements of the setting, and all the characters, including some of the chorus members, mostly sang from, or close to, the proscenium, and often directly facing the public. This choice had a double effect: vocally, it meant that the audience and the orchestra members could hear voices more clearly than usual, and therefore the former could enjoy more nuances in the performance, and the latter could coordinate better with the voices. On the other hand, this also meant that the actors' freedom to move was limited and that created a sense of stillness in the action.

Nonetheless, some repetitions in the acting enhanced the overall dramatic effect, thanks also to outstanding performances by the singers. In particular, this type of acting benefited the relationship between Odabella and Attila. This was immediately characterized by both aggressiveness and respect, which came across thanks to the brilliant interpretations of Lucrecia Garcia and Ferruccio Furlanetto. For instance, as Attila agrees to give back the sword to Odabella, because she had been fighting valiantly in the battle, he points the sword to her chest for a few long seconds, before finally handing it to her. This moment of suspense was echoed at the end of the opera: Attila, surrounded by his guests (and enemies) who all betrayed him in different ways, does not withdraw – rather, he presents his chest to Odabella, as she points at him the same sword that he had given back to her. This time, the outcome is tragic, and Attila dies at the hand of the woman.

Furlanetto's performance was breathtaking. Although representing the omnipresent destroyer, Attila is a more sympathetic character in Verdi's interpretation. Furlanetto made all the faces of his character emerge: with great precision and vigour, he portrayed Attila as vulnerable and authoritative, graceful and rough at the same time. In the dream sequence at the end of Act I, in which he has a premonitory dream of Pope Leo's appearance, it was almost as if completely different characters inhabited Furlanetto's body, so intense were the variations in his interpretation: he is the bravest warrior, and yet he confesses to his soldier Uldino (an elegant Nathaniel Peake) of how frightening his vision had been: "L'alma in petto ad Attila s'agghiaccia di terror " ("the soul in Attila's chest is chilled with terror"). At these lines, the auditorium fell into complete silence, on account of of how disarming the confession of Furlanetto's Attila was. 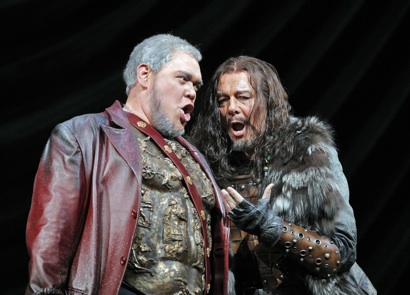 Furlanetto definitely had the most imposing vocal and stage presence. Close to him came baritone Quinn Kelsey with his masterful portrayal of Roman general Ezio. As Furlanetto himself commented in a recent interview, Kelsey's timbre has special warm and elegant qualities that make him perfectly suited for Verdian roles. His interpretation was sophisticated, both on the vocal and on the acting side. The duet between him and Furlanetto in the prologue reached an emotional and artistic level that made it comparable to the best renditions of the most poignant Verdian duets for bass and baritone – the one between Simone and Fiesco in Act III of Simon Boccanegra comes to mind.

Lucrecia Garcia as the fierce Odabella presented some uncertainties in the higher register, where her voice would lose some of the support at times. Apart from this, I highly enjoyed her deep, dark tones, especially in her middle and lower registers. Her messe di voce were also particularly impressive, and they came across powerfully in the most intimate moment – when she would sing softly with the accompaniment of solo instruments – as well as in the difficult coloratura parts. The role of Odabella requires a strong yet agile soprano timbre: it was written for German soprano Sofia Loewe who was an expert of the Donizetti repertoire. Garcia has the technique and passion to become an accomplished interpreters of this type of role.

Tenor Diego Torre was also a convincing Foresto, a knight from Aquileia (the city that Attila destroyed last) and Odabella's betrothed. He came across as slightly too overpowering at first: he delivered his initial numbers with precision and vigour, but there wasn't enough contrast between the different temperaments – first tender, later warlike and exhortative – of the arias. On the other hand, as the performance went on, he brought to the surface all the nuances in his character. His timbre, bright and energetic, gave life to an impulsive and melancholy character.

In his cameo performance as Pope Leo I, Samuel Ramey appeared as equally intimidating and dignified, and the audience reserved for him a big round of applause. He has always been very fond of the SF Opera and of this particular Verdi opera, which he premiered in the Bay Area in a famous production in 1991. 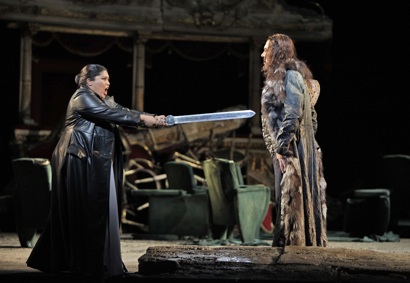 The chorus was choreographed very simply – it was mostly immobile. But the intensity with which the singers delivered their lines was breathtaking. All the ensemble scenes were wonderfully nuanced. This is thanks both to chorus director Ian Robertson (who was awarded the prestigious SF Opera Medal at the end of the performance) and to Nicola Luisotti who, from the pit, maintained a constant dialogue with all the performers on stage.

Luisotti's contribution in this performance was outstanding: he conducted with such fire and energy as I had never witnessed before in his SF Opera tenure, despite many other wonderful performances. The orchestra and the singers could transform a fortissimo into an intimate pianissimo in the space of a few bars, with incredible cohesion. Some swift changes in the tempi were also surprising and wonderfully executed – the dramatic, overwhelming strette were some of my personal highlights of the performance. Silences and pauses, as well, were effectively exploited to enhance the emotional weight of the opera.

While commenting on this particular Verdi opera, my friend and Donizetti scholar Claudio Vellutini commented that Attila is like a rough diamond: it is not ready on its own, but if placed into to caring and patient hands, it can be transformed in the most beautiful work of art. Through rare passion and musical understanding, Luisotti, Furlanetto and the whole cast of Attila achieved precisely what my friend was suggesting: they made Verdi's Attila shine.