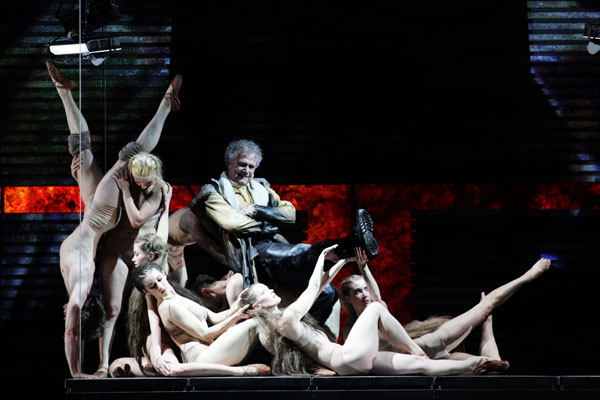 2013 will be the bicentenary of Richard Wagner's (as well as Verdi's) birth. To celebrate the German composer, La Scala is staging a new production of the Ring which will span over four seasons, with the Tetralogy being performed in its entirety in June 2013. This is certainly something to look forward to, especially since the last complete Ring in Milan occurred in 1963 under the baton of André Cluytens. Director of the new Milanese production is Guy Cassiers, while Daniel Barenboim will be conducting each of the four operas.

Das Rheingold opened on 16 May 2010 (the première, originally scheduled for the 13th, was cancelled due to a strike). It was clear (at least from what one could judge from the Rheingold) that Cassiers's Ring wishes to address some of the great questions raised by the contemporary globalisation process: the continuous flow of information and images; the virtualisation of reality; consumerist society; ideological confusion, and so on. These ideas are rendered through a high-tech production which makes large use of background projections. In the first scene, the three Rhinemaidens, who mock the Nibelung dwarf Alberich and his attempts to catch them, represent a virtual reality for the dwarf, creating frustration, exactly as the huge images of "webcam girls" which are projected in the background. Large projections are also used in the second scene, when big shadows accompany the arrival of the two giants, with visible viscera drawn inside these shadows. In the third scene, the underground realm of the Nibelheim becomes a Big Brother world: there are a control room, a television studio, surveillance cameras, with indiscernible images and videos in the background. In the final scene, the gods' departure to the Valhalla is accompanied by projections of decomposed bodies: the world is falling apart. 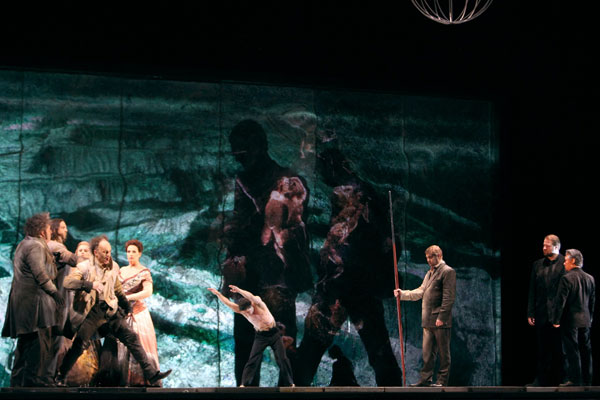 The concept behind Cassiers' production is evident. However, its realization lacks clarity and uniformity. In particular, the prominent presence of dancers throughout the opera appears to be unconvincing – if not at times a disturbing and distracting element. Wagner's gods are constantly accompanied by dancers who, as interior shadows of the characters, physically express their emotions, fears and passions. In the world of the Nibelung, on the contrary, dancers become pure objects and instruments of Alberich, who manipulates them and uses them as labour force.

It was also difficult to find consistency in Tim Van Steenbergen's costumes: Gods, Nibelungs and giants were all dressed pretty much the same in modern clothes, while Fricka's dress resembled (perhaps) that of a late 19 th century princess.

If Cassiers' production casts some doubts Daniel Barenboim's conducting was absolutely marvellous. There was no single point in the performance lacking tension, and Barenboim was able to guide the orchestra through subtle atmospheres, poetic nuances and evocative moments (remarkable were his rendition of Erda's appearance and the magic finale of the gods' entrance into the Valhalla). Baremboim's interpretation was truly enchanting: it made one really look forward to the other three operas of the Ring (Die Walküre will open La Scala's 2010-11 season in December and will feature Waltraud Meier as Sieglinde and Nina Stemme as Brünnhilde, along with René Pape as Wotan). 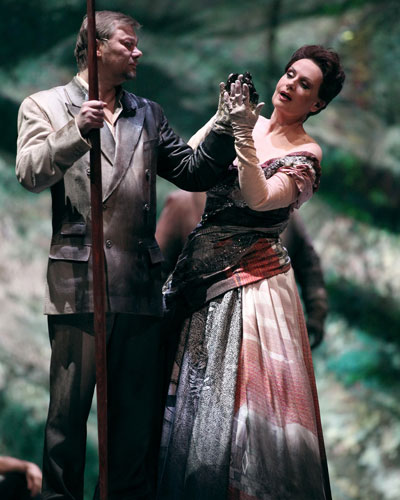 René Pape, who has sung several Ring roles in the past, made his debut as Wotan in Rheingold. Despite a certain lack of volume in the lower tessitura, Pape managed to wonderfully portray the tragic character of the king of the gods, showing several interesting interpretative ideas throughout the performance together with a great art of legato. Stephan Rügamer and Kwangchul Youn were, with Pape, the most interesting voices in this Rheingold. Rügamer has a neat timbre, great phrasing abilities and impeccable acting capabilities which allowed him to perfectly depict the deceitful and tricky character of Loge. A robust voice and a flawless German diction distinguished South-Korean bass Youn, an excellent Fasolt. Timo Riihonen, who was his brother giant, Fafner, on the contrary had too light a voice for the role. Johannes Martin Kränzle gave life to a credible Alberich, even if he succumbed to the orchestra in certain topical moments of the opera.

The performance of Doris Soffel as Fricka was marked by some good interpretative moments and memorable pianissimos. Anna Samuil's rendition of Freia was overall appropriate. Finally, Erda: the appearance of the earth goddess who powerfully warns Wotan and urges him to give up the ring is a moment in the Rheingold which has the potential to completely bewitch the listener. While Anna Larsson's rendition was flawless, it left me a little disappointed for the lack of magical and solemn atmosphere which, despite the noble playing of the orchestra, was somehow absent from her interpretation.