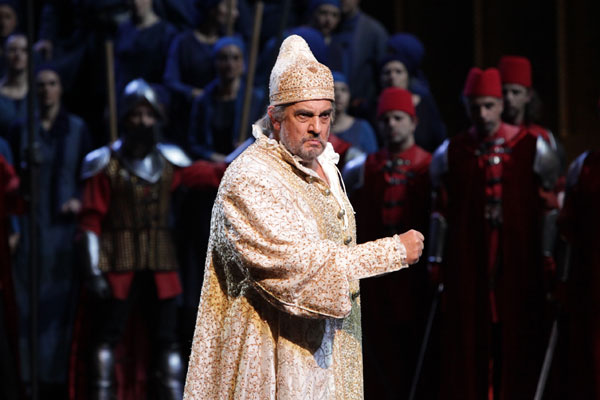 Plácido Domingo's Simon Boccanegra has arrived at Teatro Alla Scala in Milan. After debuting as the Doge in Berlin in 2009 and at the Met in New York earlier this year, the Spanish singer is currently singing the title role of Verdi's opera in a series of performances in Milan. The Domingo-Boccanegra 'tour' will continue this summer first in London (ROH) and then in Madrid (Teatro Real).

The performances at La Scala, where Simon Boccanegra's thoroughly revised second version had its premiere in 1881, were awaited with impatience. The highly demanding Italian audience was eager to judge the Spanish tenor tackling one of Verdi's most beautiful baritone roles. The series of six performances (the opening night was on 16 April) was also Domingo's comeback on stage following a colon cancer surgery which he underwent less than two months ago.

There has been already much debate on Domingo's decision to perform the complex baritone role of the Doge of Genoa, the peacemaker between opposite factions in the Ligurian city and the anguished character torn by a personal turn of events (the death of his beloved and the painful loss of his daughter). Although Domingo's voice has become darker with time, the colouring of his voice is still that of a tenor, and certainly not that of a baritone. This said, and despite the fact that his voice has at times shown little signs of senescence, his performance was stunning throughout the night.

Domingo was extremely expressive especially in the most intimate and pained parts of the opera. Some of his solo parts were the most memorable moments of the evening: the poisoning scene in Act 2 when the Doge reflects about the ongoing conspiracy and is torn between leniency and punishment; the glittering invocation of his beloved Genoese sea ('O refrigerio! …la marina brezza') at the beginning of Act 3, where his body is slowly feeling the poison's effects; and the ensuing duet with Fiesco, his de facto father-in-law, where Domingo showed a wonderful legato and conveyed strong emotional power. The Andante mosso 'Plebe! Patrizi! …Popolo' in the famous Council Scene at the end of Act 1, in which the Doge manages to placate the city's opposing factions of aristocrats and plebeians, was truly moving in its second part with Boccanegra mourning for the city's conflicts and supplicating for peace ('Piango su voi…'). 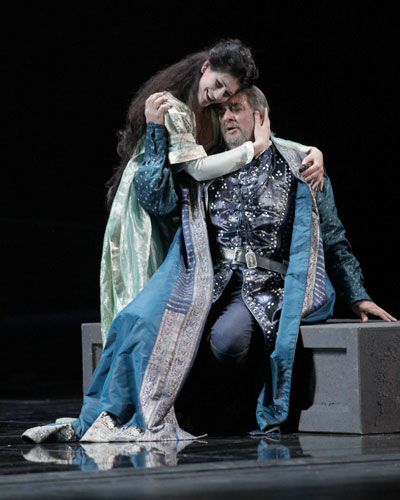 Anja Harteros was a wonderful Amelia Grimaldi. The German soprano seems to be at ease both in Wagnerian roles (she was a convincing Elisabeth in last month's Tannhäuser here at La Scala) and in lyric Verdian roles such as Boccanegra's daughter. Except for a somewhat uncertain start in the opening aria of Act 1 ('Come in quest'ora bruna'), her rendition of Amelia was flawless and fabulous throughout. Her powerful and robust voice allows her to excel especially in the more dramatic parts of the opera. The impassioned monologue in which Amelia narrates how she was abducted ('Nell'ora soave') was outstanding, and so was her plead for peace ('Pace…') at the end of the Council scene, where Harteros showed beautiful and delicate phrasing.

Gabriele Adorno, Amelia's lover, the Doge's political enemy and his reconciled successor at the end of the opera, was interpreted by Italian tenor Fabio Sartori. Sartori, who has a very good middle register and a quite adequate high register, sang well and without difficulties throughout the night. However, his rendition of the ardent character of Gabriele was marked for the most part by a somewhat monotonous phrasing and by a rather unchangeable and perennial mezzo-forte, without any truly remarkable moment of pathos which the character of Gabriele would require. His static acting also contributed to making his Gabriele not entirely convincing.

Ferruccio Furlanetto's Jacopo Fiesco was welcomed with strong disapproval by the Milanese audience. For sure Furlanetto's voice sounded at times very rough in the higher register and for the most part too 'veristic' and emphatic. However his attempt to give life to a fierce, stern and sometimes arrogant character was quite successful. The villain Paolo Albiani was sung by a very good Massimo Cavalletti, notable for his perfect diction and captivating presence on stage. 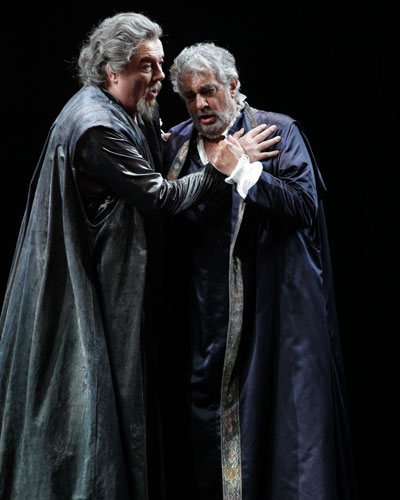 Finally, Daniel Barenboim's conducting. When the Argentine-born conductor returned to the podium after the intermission following Act 1 (and the same happened after the final curtain fall), he was welcomed by a number of vehement boos, which were immediately contrasted by very loud 'bravo' and enthusiastic applauses (not at all an unusual situation at La Scala!). In my opinion, Barenboim managed to masterly depict the gloomy atmosphere which marks certain parts of the opera (first and foremost the prologue). However, his tempos were at times excessively slow and monotonous (for example in the romanza 'Il lacerato spirito' sung by Fiesco in the prologue or in the Gabriele-Amelia duet 'Vieni a mirar la cerula'), and the orchestra sounded too thunderous in certain passages, almost completely covering the singers.

The opera was co-produced by La Scala and Berlin's Staatsoper Unter den Linden. The staging was by Federico Tiezzi and the overall quite stylized and minimalistic sets were by Pier Paolo Bisleri. Some of Tiezzi's ideas are noteworthy: the evocative and huge trees with visible roots coming down slowly in the background as Boccanegra and Amelia are gradually reunited as father and daughter in Act 1 ('Favella il Doge'), also one of the musical highpoints of the entire night; or the final act which manages to convey, in its simplicity, the image of Boccanegra's solitude, by leaving the Doge alone with the grand and opulent golden throne on stage, symbol of the power that Simone was never eager to achieve; and the very final scene where the choir appears in costumes from Verdi's time (and not from the 14th century, when the opera is meant to take place), making Simon Boccanegra a symbol and a forerunner of Italy's unity.