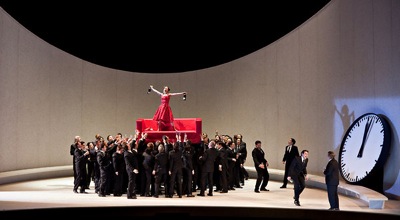 Willy Decker wasn't the first man to try and gain a better perspective of the courtesan Violetta by examining what lay beneath the iconic red dress.  But I have to wonder whether the German director's psychological undressing of the heroine in the present Met production has uncovered anything more revealing than his predecessors.

Violetta, the Camille of Dumas's play from which Francesco Paive's libretto formed the genesis of Verdi's La Traviata, leads a colorful and glamorous lifestyle that the audience longs to experience—if only vicariously. (Who doesn't long for a glass of the bubbly during the Libiamo?)  The courtesan nonetheless abandons her lavish lifestyle in exchange for "true love," only to relinquish her newfound happiness for the sake of the one she loves so dearly.

Violetta's sacrifice comes at a cost, of course.  But in order to appreciate the magnitude of this sacrifice, the audience must first savor the extravagance of the culture in which she has immersed herself.  In stripping Violetta of her lavish possessions and removing all sense of gaiety, however, Decker—aided and abetted by Wolfgang Gussmann's bare-bones set and colorless costumes—confines his examination of the heroine to her soul.  So while Violetta's conversion seems real enough, her courtesan alter ego has now been demoted to that of a monochromatic, abstract state of mind.  Now, when she sings the Sempre libera at the close of Act 1, affirming her determination to live only for pleasure, it's anybody's guess what these pleasures might be.

Those who had hoped to discover in the singing the pizzazz missing in the set and costumes were likely to have been disappointed.

In her Met debut as Violetta, Natalie Dessay forged a sympathetic (if not overly fragile) character who, under the close-up camerawork of TV director Gary Halvorson, appeared so exhausted and sickly I wondered whether she would last through the final curtain.  Indeed, Dessay seemed uncharacteristically weak in voice—and perhaps a tad hoarse as well, judging from her speaking voice during the backstage interview with Deborah Voigt.  She struggled with some of the high notes, including the optional final E-flat at the end of Act 1. 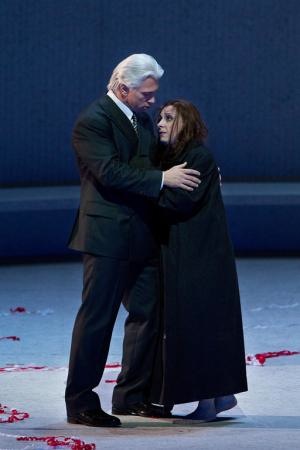 The quality of Dessay's voice, while muted, nevertheless retained the beauty of timbre to which we have become accustomed in prior Met simulcasts, such as in last season'sLucia di Lammermoor.  The coloraturas in the Sempre libera were sufficiently elastic, and her Addio! Del passato—in which she bids a whisper-quiet farewell to life—evoked sufficient sympathy and a tear or two.

As Alfredo, Matthew Polenzani sang with a pleasant but oftentimes tame tenor.  I thought it odd that he didn't muster up a larger, more powerful vocal presence in both the splashy Libiamo and the second-act De' miei bollenti spiriti, where he reflects upon his new life with Violetta (it's possible he did not wish to overpower Dessay).  Nor did Polenzani's acting—convincing only during times of anger (such as in his rage and fury denouncing Violetta in Questa donna conoscete? at the end of Act 2)—do much to enhance the drama.

Dmitri Hvorostovsky cut an imposing figure as Alfredo's manipulative father, Giorgio Germont.  The Siberian singing sensation, as some prefer to call him (and not without merit), looked somewhat like a grey-haired Arnold Schwarzenegger.  He carried a handsome and weighty baritone as he importuned Violetta in the second-act to make a great sacrifice and give up Alfredo for the good of Germont's daughter (Pura siccome un angelo), and again in his signature aria, Di Provenza, consoling his son after the latter had been devastated after reading Violetta's "Dear John" letter.

Hvorostovsky did however have an occasional tendency to sing sharp throughout the afternoon, especially in the louder sections—such as when he reprimanded Alfredo for his inexcusable behavior in publicly humiliating Violetta.

The set, reprised from the Met's 2010-2011 production of La Traviata, comprises a curved, amorphous structure that resembles a prison courtyard surrounded by tall walls over which the chorus, dressed alike in unisex black tuxedos, voyeuristically watches the action below.  A large clock rests within the walls, casting an expressionist-surrealistic look at time and space that seems detached from (or at least indifferent to) the opera's plot. 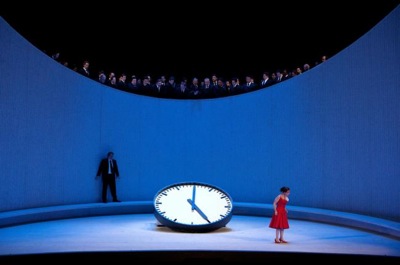 But whatever one may think of Decker's controversial set, the director deserves to be credited with a number of effective (and occasionally memorable) staging effects—such as the pantomime during the prelude to Act 1 that reveals the dying, consumptive heroine slowly staggering across the stage to the mysterious Dr. Grenvil (Luigi Roni), who in this production is made to double as The Grim Reaper.  And I'll never forget the spectacle of the enraged Alfredo in the Questa donna conoscete as he tosses his gambling winnings, one bill at a time, at the browbeaten Violetta as she lay stretched motionlessly over the set's giant clock.  Finally, there's the clever segue from Act 2 to Act 3, where the curtain remains up and the action continues uninterrupted as the characters slowly exit the stage, walking backwards step by step, leaving only a dying Violetta sprawled onstage beneath the solitary spotlight that illuminates her.

Conductor Fabio Luisi had his work cut out for him during the performance, possibly due to staging problems that may have affected the performers' line of sight with the podium.  The chorus in particular had ensemble problems, rushing ahead of Luisi's baton during several of its numbers, such as while looking down at the stage from above the walls in Act 1, and while at ground level during the frenzied gambling party at in Act 2.  Dessay, too, had a tendency to rush ahead of the beat, including her entrance in the Libiamo and again near the conclusion of the great second-act duet with Hvorostovsky.

The Met Orchestra was outstanding, as usual. What a pity the singers couldn't stay with them.  I especially enjoyed the ethereal high-register reminiscence motif, whispered by eight stands of violins, that portends Violetta's fatal illness both in the opening prelude and again in the beginning of the final act.

Perhaps the orchestra should have included a death motif for this austere production, as well