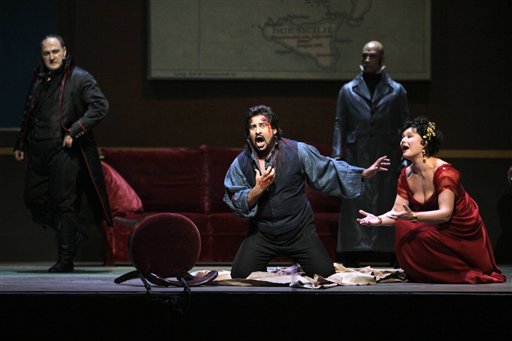 It may be too early to argue the relative merits of experiencing opera live in the theater and watching it live via high-definition simulcast broadcast, but one thing's for certain: the more you see, the greater your vision.

Luc Bondy and his production team have been maligned repeatedly in the media, partly over his remodeling of a beloved and sacrosanct warhorse, but mostly over his heretical break with the quarter-century-old Zeffirelli production that, in New York at least, has evolved into something akin to a local shrine.

Broadcast in more than 1,000 theaters across 42 countries spanning six continents, the performance of the Met's Tosca on 10 October allowed audiences across the globe a vantage-point unavailable to those present at this, or any prior performance of Tosca at Lincoln Center – a chance to examine, in great detail, all the aspects of the production as if they were actually onstage with the singers. Watching the performance gave me cause to re-evaluate Bondy's new vision, whose success depends more perhaps on the sense of mood portrayed from the sets than the actual appearance of the structures themselves. My conclusion: the booing was unjust. Bondy's production, judged independently of any prior production and taken wholly on its own merits, is quite convincing.

Set Designer Richard Peduzzi's drab and musty interior of the Church of Sant'Andrea della Valle (one can almost smell the mildew on the church walls) produces a depressing atmosphere akin to an Ingmar Bergman film. And like Bergman's films, the visual aspects in this production are inexorably bound to moods they intend to portray. There's no stained glass to be found in this church, and a disorganized arrangement of folding chairs takes the place of pews. The similarity of mood to Castel Sant'Angelo prison in Act III, where a helpless Cavaradossi awaits his fate, soon becomes apparent: at the hands of an oppressive regime, there is no more refuge within a place of worship than there is within a place of incarceration. 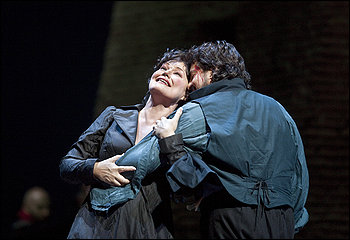 A motif of "red" runs like blood throughout Scarpia's palace in Act II, anchored by a pair of menacing-looking red couches. At the end of the scene we see Tosca, in the manner of Lady Macbeth, trying unsuccessfully to rid the blood from her hands. Bondy's presumably superfluous staging of the three prostitutes at the opening of this act has also stoked the flames of criticism. There is, nevertheless, much method to the director's madness. Scarpia is shown in this production to be uninterested in the favors of the triumvirate (they stroke his chest and lap without response), from whom he would ostensibly derive more sexual pleasure than a clearly unwilling Tosca. Bondy demonstrates that it is not sex Scarpia craves, but rather the act of conquest.

The loudest criticism, however, comes from Bondy's tinkering with the famous murder scene, where Puccini instructs his heroine, after she fatally stabs Scarpia, to perform a ritual that places candles on either side of the corpse and a crucifix on its chest. Here, the fearless director eschews the iconic ritual and instead instructs Tosca to climb nervously onto ledge of the large open windows and – for several dramatic moments – contemplate her next move. There is much dramatic action in silence, particularly following an intensely dramatic event (do you recall the grand pause near the end of the slow movement of Tchaikovsky's Fifth Symphony?). For me, the silence in this climactic scene was deafening.

With the help of a dark wig and brown contact lenses, the blonde-haired, green-eyed Finnish soprano, Karita Mattila, looked plausible in her role as "the dark-haired beauty" Italian actress-singer, Tosca (if not just a wee bit past the heroine's prime). As an actress, however, Mattila appeared much less convincing and could not match the vivid characterizations evoked by her two counterparts, Marcelo Álvarez (Cavaradossi) and George Gagnidze (Scarpia).

Mattila's voice is quite lovely – a rich dramatic soprano sufficiently flexible to reach the extremes of emotion demanded by Puccini, from the vengeful jealousy over the woman who inspired Cavaradossi's painting, to the poignant understatement of her signature aria, Vissi d'arte. Still, Mattila annoyingly sang slightly above-pitch during most of the performance, her vibrato occasionally bringing her close to a striking quarter-tone sharp.

The large and imposing figure of Gagnidze, a commanding baritone from the Republic of Georgia, produced an especially gripping and sinister Scarpia, Rome's Chief of Police in whose presence everyone – including Scarpia's own secret police – would shudder at his feet. In one memorable moment at the end of Act I, Gagnidze addresses Tosca while enlarging the sockets of his eyes as a bear might spread its arms before squeezing the life out of its prey. "Tosca, you make me forget God", says Gagnidze, who then pulls the statue of the Virgin Mary towards him and kisses its lips triumphantly.

Gagnidze's firm command of vocal delivery and intensity of timbre in his high register matched the level of his acting abilities and was largely responsible for the convincing display of his character in the self-congratulatory aria Va, Tosca! and creed-defining Ha piu forte sapore.

The most magnificent singing and acting of the afternoon came from Argentine tenor, Marcelo Álvarez, whose Cavaradossi breathed Romantic passion and defiance throughout the opera. Álvarez sang with a smooth, liquid legato that connected even the widest intervals within Puccini's phrases, and his top range retained its luster and focus throughout the lengthy performance. Álvarez' Act III signature aria, E lucevan le stelLe, was ripe with expression and pathos, with just enough restraint to avoid sounding lugubrious. As it often does, this aria proved to be a show-stopper – with profuse applause and howls of approval from the both the Met audience and the movie theater crowd surrounding me.

Milena Canonero's period costumes proved a perfect complement to the sets, and Tosca's gown in Act II was truly stunning. Canonero's asymmetrically colored ceremonial vestments worn by the priests and alter boys mirrored the disunity of the interior of Peduzzi's church design.

Except for some minor pitch problems in the brass and wind sections during two sustained chords, an alert Met Orchestra under the able direction of Joseph Colaneri produced some magnificent moments in Puccini's brass-centric score, maintaining the relentless tension until the final curtain. The Met Chorus sang its two reoccurring phrases in strong voice during the Act I Te Deum.