Janácek: From the House of the Dead 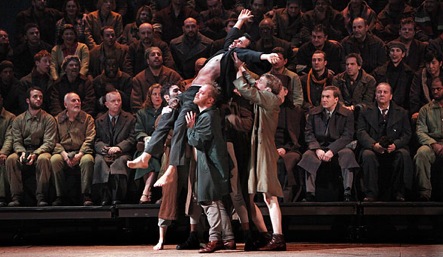 The Met's current production of Janácek's From the House of the Dead enlists the work of none other than the amazing Patrice Chéreau (the buzzwords 1976, Ring cycle and Bayreuth are enough these days to send shivers of delight down any opera lover's spine) and Esa-Pekka Salonen on the podium. What is more, both men are making their Met début. Needless to say, a glowing couplet of names such as this one is usually put to the service of either jolting a standard piece of repertoire back to life or, as is the case here, making a difficult, and seldom heard score palatable to the general public.

Indeed, Janácek's From the House of the Dead is a formidable challenge for any director. Although it was the composer's last opera (the third act was on the desk at the time of his death), it was composed at a feverish pace—the first version was ready in six months—and without the aid of a librettist (Jana?ek simply took the text straight from Dostoevsky's The House of the Dead, translating from Russian as he went along). It is a deeply strange opera, taking place among the inmates of a prison camp. The audience is given no overarching plot, no real protagonists, no heroes, no love interests and no women (except for the brief appearance of a prostitute in act 2). Women, love and grand gestures enter the plot via the inmates' reminiscence of the crimes they have committed. The orchestral score is saturated with folk-songs: the orchestra takes on the task of referencing the outside world that neither us nor the inmates have access to. The timbric palette is pervaded by a sinister glow, one that caused discomfort even to Janácek's own students, who after their teacher's death felt the need to ‘plump-up' what they felt to be an overly stark orchestration for an operatic score (their additions have now been removed from the standard performance score of the opera). 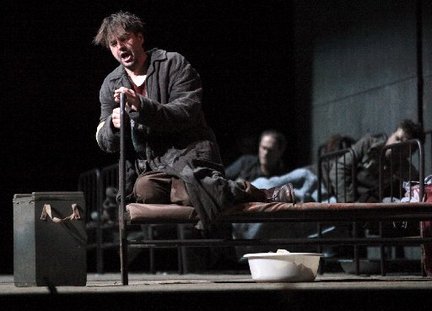 Luckily, Chéreau is much wiser than Janácek's students. His fundamental intuition is that Janácek meant for his opera to be bare and sharp around the edges—and thus the only thing to do for a director is to strip, and sharpen the vision further. And strip he does: three stripped walls enclose the prisoners. Most action takes place in semi-darkness. There is no way out except for the open ceiling, from which filters in the comfortless light of a clouded Siberian sky. The prisoners are often changing in and out of their clothes onstage, carelessly revealing grim flashes of skin. When dressed, inmates wear the sort of generic garments that bear few markers of historical context: this could be anytime between 1860 to 2009. The game of mirrors Chéreau creates here is impactful. The generic clothes are a nod to the precariousness of the fourth wall: both the audience and on-stage characters are shut away in a closed space, both are now dreaming of a time and a place other than their own. All of this, however, comes somewhat to the detriment of dramatic clarity. It is difficult enough to follow a plot with no protagonist nor narrative, but to distinguish between several similarly dressed secondary characters is near-impossible.

Yet what truly marks out the production is the symbiosis between the musical imagery and the visual realization: the continuous presence of ostinati in the score for instance, is taken by Chéreau and Salonen to stand for a stiltedness, the inability to move. Chéreau has clearly worked with the singers to develop a body language that matches this description to an eerie degree: the inmates walk around like cripples, their movements are awkward and sudden. Dancing takes on a special function as the ultimate signifier of utter despair: when a reminiscing Skuratov (Kurt Streit) breaks off into a lone, unrestrained dance, it is truly uncomfortable to watch him.

The singers' extreme physical expressiveness was matched by superb singing, particularly Peter Mattei's Shiskov (whose act 3 monologue was every bit the tour de force it was intended to be) and the sweet piercing tenor of Eric Stoklossa as the young inmate Alyeya. It was a little odd to see someone as distinguished Williard White taking on the role of Gorianchikov, for this character (despite being the protagonist and narrator in Dostoevsky's novel) hardly ever sings in Janácek's opera. When White did sing, however, his dramatic presence was unmistakeable. Another mention must go to the male chorus, whose wordless singing (meant to portray the sighs of the sleeping prisoners) accompanies Shiskov's monologue in act 3 to a genuinely startling effect. Holding it all together from the podium was Salonen, who managed to lend coherency to an orchestral score that matches the plot in lack of narrative coherency. While complicit in the sanguine reminiscences of the inmates, the orchestra's narrating voice often hides behind a curtain of stylized folksong: tales of murder are often told to the sound of a gentle Slavonic melody. Salonen mediated with mastery between the expressive and the stylized.

It is rare to witness a production that successfully manages to both stage an opera that is outside the standard repertoire and to do so with an obviously modernist flair. This production achieves both goals while sustaining a consistently high standard of music-making throughout.