Live Telecast from The Metropolitan Opera 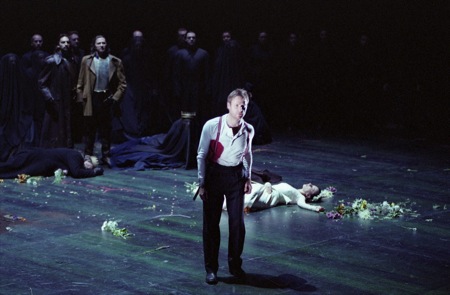 If you're curious as to why it has taken the Metropolitan Opera 113 years to re-stage Ambroise Thomas' Hamlet, you'll need to look no further than the music.

Certainly, the mostly-attractive (if not lengthy) musical score has its moments. The love duet between Hamlet and Ophelia, the remarkable septet at the end of the second act and the celebrated coloratura passages in the famous "Mad Scene" can hold its own with the best that Verdi has to offer — as can Thomas' handsomely orchestrated preludes and entr'acts. It's just that there aren't enough such "moments" to sustain the level of intensity that pervades the drama. Over the course of this three-hour and 20-minute opera, Thomas' musical score earns its 15 minutes of fame, but little more. Do the math...

The libretto by Michel Carré and Jules Barbier, adapted from Dumas' version of the play, represents an obvious departure from the Shakespeare original — with the Bard's thirty-odd characters truncated to just fourteen (counting the three mimes). Moreover, a number of the original subplots have been tweaked, altered or eliminated altogether. Still, the libretto to Hamlet merits serious consideration as a powerful drama within its own right, with sufficient character delineation of the principal roles and meaningful discourse among the characters (particularly with respect to Hamlet and his mother). This is Hamlet, all right — it's just not Shakespeare's Hamlet.

The production staff of Patrice Caurier and Moshe Leiser, who first introduced the present version at the Grand Théâtre de Genève in 1996, adopted a minimalist approach to the sets, costumes and props that emphasizes the character-driven focus of Thomas' setting. Christian Fenouillat's set design, principally a two-piece ensemble of curve-shaped walls that move in circular fashion (by stagehands visible to the audience), depicts a barren stage devoid of ornaments and props — giving more an impression of the interior of a Calvinist Church than Elsinore Castle. In similar fashion, the dowdy and curiously featureless costumes designed by Agostino Cavalca (the male characters wear military-style boots and iron breastplates covered by trench coats) kept the listener's attention focused more upon the story-line than the actors.

All in all, the drab amalgam of staging, scenery and costumes create a worthy (if not unwelcome) complement to the arioso-style musical language devised by Thomas that for the most part restrains the music so as not to supersede the dramatic action. This is, however, opera — and French opera, at that. Where are the beautiful melodies worthy of Gounod, Bizet and Offenbach?

Whatever you may think of the music, there's little doubt that Simon Keenlyside, as the troubled title character, forged a credible-looking Hamlet whose charisma injected a degree of anima into the role.

Keenlyside's handsome baritone was strong in voice throughout the performance, adding weight and substance to an already commanding stage presence. His tender delivery in the first-act Love Duet with Ophelia (Doute de la lumière), the first theme of which returns like a leitmotif throughout the opera (including Ophelia's Mad Scene), appeared earnest, heartfelt and genuine.

As an actor, Keenlyside brought intensity — although not a great deal of nuance — to his performance. Yes, he appears duly troubled and concerned throughout the production, but there are many faces of "troubled and concerned:" suspicious, confused, angry, cynical and vengeful. I wish we could have seen them all.

When in Act 2 Hamlet's Uncle Claudius offers his hand in homage to the Prince's deceased father, Keenlyside's expression should rightfully appear cynical as he rejects the handshake and retorts, "his is cold and lifeless." Moreover, I was hoping to see at least some degree of ambivalence on Keenlyside's face when in Act 3 he tells Ophelia "get thee to a nunnery." Also unconvincing was Keenlyside's mannerisms during the Act 2 Pantomime and Finale, as he poured red wine suggestively upon his head (metaphor for the blood of his murdered father) in a forced and clumsy attempt to feign madness. 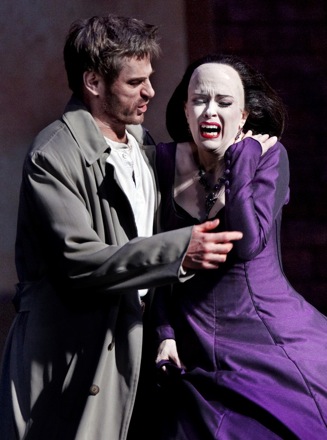 German soprano Marlis Petersen, in the tragic role of Ophelia, crafted a sympathetic heroine whose virginal white gown mirrors her character's innocence and fragility. Originally a last-minute replacement for the indisposed Natalie Dessay when the production opened earlier this month, Petersen's warm and expressive soprano and flexible coloratura obviates any need to mourn Dessay's absence.

It's interesting to watch Petersen on the big screen, where one can see her opening her mouth widely to shape and resonate the lovely sounds that come from her body. The "Love Duet" with Keenlyside was immediately appealing, with a colorful and malleable vocal delivery that allowed her to color the phrases to fit the meaning of the words, and her wide range of dynamics in the tender opening aria of Act 2 (Sa main depuis hier n'a pas touché ma main!) captured the necessary degree of vulnerability.

Naturally, all sopranos in this role will be judged principally upon their degrees of success in the celebrated "Mad Scene," which takes up virtually the entire fourth act. The site of the delusional Petersen, barefooted and dressed in a wedding gown (with a childlike look on her face that resembled a bride abandoned at the altar who nevertheless preferred to remain in denial) was enough to evoke great pity and sympathy, and it was clear from the expressions on the faces of those sitting around me that they were moved, as was I, by her performance.

Petersen's evocative coloraturas in the Waltz — with its rapid trills, large intervallic leaps and high register work — were quite good, although I was most impressed with her sensitive delivery of the delicate Ballade that followed (Et maintenant écoutez ma chanson).

Petersen's suicide at the conclusion of the "Mad Scene" was, for the most part, staged convincingly. Still, I'm at a loss to explain the significance of the pouch she wore around her waist (it looked somewhere between a money belt and a poo-poo-cushion), or why her graphic self-mutilation was necessary or relevant to the production (Caurier and Leiser places Ophelia in her room at the castle instead of by the lake, and shifts her death from drowning to self-inflicted mutilation by a dagger).

Jennifer Larmore's three-dimensional portrayal of Hamlet's mother, Queen Gertrude, was the singularly most outstanding acting effort in this production and she remained in-character at all times, whether singing or reacting to another's singing. Larmore's rich and colorful mezzo-soprano shimmered in perfect harmony with her commanding stage presence and created some memorable musical moments — such as the lengthy decrescendo in the second-act Recitative and Duet with Petersen (Dans sons regards plus somber), which melted from a full-throttle forte to a delicate pianissimo at the duet's conclusion. Moreover, she was the only character whose French diction was consistently intelligible.

Larmore's multihued characterization of the Queen ran the gamut from manipulative (the Arioso in Act 2, where Gertrude persuades Ophelia not to leave the court following the latter's rejection by Hamlet) to angstful paranoia (the Act 2 Duet, as Claudius tries in vain to convince her that Hamlet has not discovered the conspiracy that culminated in the King's poisoning) to genuine contrition and remorse, as she throws herself before Hamlet begging for mercy in the mighty third-act "Closet Scene" Duet (Pardonne, hélas!). This number, the culmination of Hamlet's complicated relationship with Gertrude that over the course of the first three acts rises to a fevered pitch and all but explodes during this climactic episode, is the emotional highpoint of the opera — and arguably Thomas' most stunning dramatic, and musical, tour-de-force of his career.

James Morris' poker-faced expression in his role of the murderous Claudius, like the aging bass-baritone's tiresome portrayal of Jacopo Fiesco in the Met's previous production of Simon Boccanegra, reduced his character to a one-dimensional figure hardly worthy of deeper inspection and further examination. Morris was clearly off-form Saturday afternoon — experiencing difficulty during the first two acts controlling a wobbly vibrato and struggling to stay on-pitch throughout his signature aria in Act 3, as he begs forgiveness from the brother he murdered (Je t'implore, ô mon frère!).

Making his Met debut in this production, Toby Spence as Laërte sang the role of Ophelia's protective brother with a warm, pleasant tone and solid vocal presence, although the young tenor's abrupt and clumsy transition from recitative to cavatina in the first-act Pour mon pays, en serviteur fidèle suggests he would do well to engage the services of a good coach. Still, Spence's fifth-act Scene and Recitative, where he challenges Hamlet to a duel over his sister's suicide, was suitably hotheaded and confrontational — a mood quickly destroyed by the staging of the duel itself: a lame, anti-climactic non-event that took all of three seconds, ending (remarkably) in the mortal wounding of both men.

Among the smaller roles, David Pittsinger as the barefooted Ghost of the murdered king dominated the stage during his brief but memorable entrances. "Kill Claudius before he can repent," he urges Hamlet in a soberly-delivered chant, made even the more chilling through its pervasive use of monotone (perhaps Thomas believed that ghosts have limited tessituras). Also commanding attention was Richard Bernstein, the first gravedigger, whose booming bass and gesticulations lent credence to his character's fatalist declarations on the subject of death and mortality. Bernstein, whom you may remember as Pietro in the Met's recent production of Simon Boccanegra, is deserving of larger roles in future productions.

TV Director Brian Large's skillful orchestration of the close-up camerawork kept Keenlyside's facial expressions at the center of attention for much of the production, and adorned Petersen's every movement during the Mad Scene (even the gratuitous carving of her breast and wrists).

In a nice touch visible perhaps only to the HD Simulcast audiences around the world, the cameras captured (with the help of Lighting Director Christophe Forey) the spooky image of the little hairs standing on-end alongside Pittsinger's right arm as the Ghost clutched Hamlet's neck and commanded him to "Kill Claudius before he can repent." There was a serious omission, however, as the cameras failed to show one of the most dramatic moments in the opera: Hamlet's snatching of the crown from Claudius' head ("Down with the lying mask! Down with the empty crown!").

Conductor Louis Langrée crafted a faithful interpretation of Thomas' score that honored the composer's wishes to keep the orchestra parked behind the singers, and his direction of the opening instrumental prelude crafted a dramatically potent foreshadowing of Hamlet's torment that was to come.

Thomas saved some of his best writing for the instrumental preludes and entr'actes that precede each of the five acts, and the Metropolitan Opera Orchestra (after some initial intonation problems between the high and low brass sections during the first-act Prelude) was outstanding during throughout the performance. The trombone section tutti unison passage that opens the third-act Entr'acte was exquisitely played, as were several individual efforts — such as the exquisite clarinet solo that opens the fourth-act, the smooth tenor trombone solo during the first-act Scene at the Ramparts, and the alto saxophone solo that signals the beginning of the Pantomime in Act 2.

A well-prepared and buoyant Metropolitan Opera Chorus sang its four-part harmony in celebration of Claudius' marriage to the Queen (Le deuil fait aux chants joyeux) with assurance and poise and good balance among vocal parts, and successfully navigated the tricky a cappella section in the Banquet Scene.