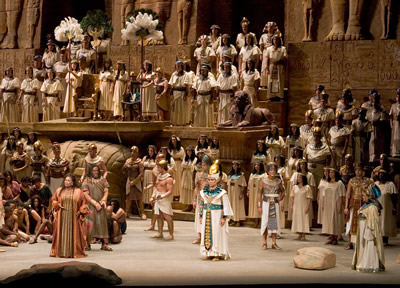 The Ethiopians weren't the only ones to go down during the October 24 Metropolitan Opera HD Live Simulcast of Aïda Saturday – a few actors joined the carnage as well.

As high-tech cameras panned in on the (mostly unsuspecting) faces of principal singers, an audience completely invisible to them scrutinized every facial expression, lip movement and sweaty forehead. Spanning some 1,000 theaters across 42 countries, this phantom audience heard the same exquisite singing as their counterparts at Lincoln Center, but saw much more of the action, perhaps even an exaggerated view of the action, from Dolora Zajick's deadpan expression (and mouth that opened only barely as she sang), to Johan Botha's turgid stage presence and bizarre gaze that resembled a deer in the headlights.

What works for the Metropolitan Opera House crowd doesn't necessarily work for the HD cameras. The brave new world forged by Peter Gelb with these HD simulcasts has changed the rules, and there's no turning back: Singers must learn to act to the cameras as well as to the listeners sitting in front of them. 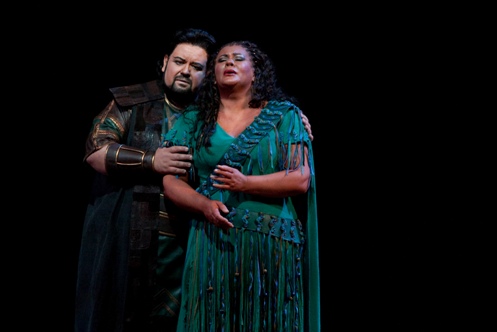 Violeta Urmana gets it. Her three-dimensional Aïda, buoyed by supple body movement and details of expression from face-to-toes, fashioned a heroine who appeared in-character when viewed from any angle and screen-size. Urmana's muscular soprano, which strained early-on in the high register when pushed during her first-act signature aria, Ritorna vincitor, grew increasingly more flexible as the performance unfolded, reaching its zenith in the poignant O patria mia of Act III. Her command of pitch and dynamics in the tenderly phrased duet of resignation (Presago il core) during the final entombment scene with Botha, particularly in the high register, was sublime.

The only other acting that could withstand such scrutiny came from Carlo Guelfi as Amonasro, Aïda's father (and disguised King of Ethiopia), whose commanding stage presence and daunting baritone generated sufficient poise and charisma to produce an image of royalty that belied the pauper's clothes. Guelfi's fanatical expression in Act III, when beseeching Aidä to choose revenge over love, is something I wish the Met audience could have seen up-close. 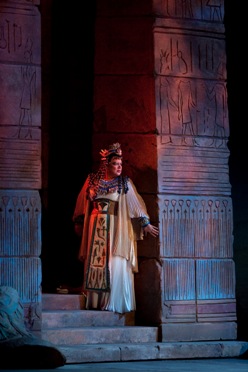 Until the final act, Dolora Zajick – as the Egyptian King's jealous daughter, Amneris – brought little life or dimension into a role she had performed some 250 times earlier (the drama I experienced was limited to trying to reconcile her beauty of tone with a mouth that barely opens wide enough to shape her vowels). The celebrated mezzo-soprano came alive however in Act IV, and rather convincingly, when she grasped the reality of the death sentence imposed on her would-be-lover, Radamès (Ohimè, morir mi sento). I suspect that Zajick's expressionless face was not so much an issue with the live Met audience as it was to those privy to the camera-work, but it sure dampened my spirits. Still, her voice remains in fine form and, at some 60 years of age, shows little signs of surrender to the march of time.

As an actor, Johan Botha's Radamès was no more convincing than Zajick. Botha's movement across the stage was stodgy and inflexible (I much preferred to watch the props), and his facial expressions appeared detached from the dramatic action unfolding before him. The singing was not disappointing, and although Botha's voice tended to push and sacrifice some degree of flexibility early on in the first-act Celeste Aïda, his dramatic tenor held firm throughout the performance, at times soaring high above the orchestra. Especially impressive was the end of Botha's final duet, in octaves, with Urmana (O terra, addio).

Of course, there's more to grand opera than acting and singing. Extravaganzas such as Aidä are largely about spectacle, and there was much to love in this grandiose revival of the original 1988 production by Sonja Frisell – with monster sets designed by Gianni Quaranta depicting eye-busting visions such as the colossal palace of the Egyptian King at Memphis that may have topped anything done by Cecil B. DeMille.

Dada Saligeri's handsome period costumes for the priests, soldiers, prisoners, slaves (and yes, horses) captured the essence of ancient Egypt, although occasionally evoking some unfortunate comparisons to contemporary culture (I could have sworn I saw the High Priest Ramfis – or someone dressed exactly like him – in several episodes of Star Trek, and the penguin-shaped hat sported by the Egyptian King during Act II looked like a gold-plated bowling pin). 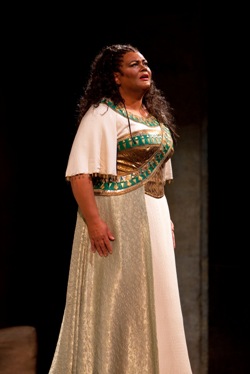 Due to the many dance episodes endemic to grand opera, Aïda is as much an aural spectacle as it is visual. The Met Orchestra, under the direction of Daniele Gatti (substituting for the ailing James Levine), was in magnificent form throughout the performance, from the somber pianissimo opening entrance of Aidä's theme in the violins to the brassy fanfares announcing victory over the Ethiopians during Act II. A number of strikingly beautiful and well-executed solo and concertante wind passages in Act III complemented the heroine's mournful O patria mia.

Alexei Ratmansky's choreography of the dance numbers during Act II was visually appealing, save for the anachronistic pas de deux at the opening of the act that seemed to be rooted more in Disneyland than Ancient Egypt. The overhead camera work on the larger dance scenes recalled the glory days of Busby Berkeley.

A well-prepared Met Chorus, under the watchful eye of Donald Palumbo, was right-on with its dotted-rhythms in the Act I Su! Del Nilo al sacro lido! during the Egyptian King's call to battle, and all but took the house down in its glorious Gloria all'Egitto in Act II. Especially impressive were the chorus' whisper-soft a capella passages, although it must be said that the offstage parts tended to sag well below the pitch dictated by the orchestra – a problem that also plagued the offstage priestess chant (Possente Phtha!) at the end of Act I.

Sadly, there were no elephants in this production. Considering the expense of the lavish sets and human resources, the Met's dollar will stretch only so far – and elephants don't work for peanuts…