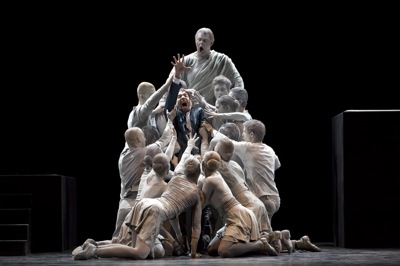 Sitting in the Rose Theater, a venue of jazz at Lincoln Center that is occasionally used for song recitals and smallish performances of opera, I remembered my frustration when, some years ago, my New York editor wrote a headline punning on the word '"Czech" for an article that I had submitted. Somehow the bon mot would have been considerably more appropriate had the ensemble that I was reviewing – the Takacs Quartet – not been Hungarian. Here at the Rose we were assembled to experience the Budapest Festival Orchestra's rendition of the Prague world premiere version of Il dissoluto punito (The Rake Punished), what we now know simply as Don Giovanni.

There are quite a few myths about Mozart and most, like the story that he played the glockenspiel in the premiere of The Magic Flute while still composing snatches of the opera during the performance, are simply not true, Wolfgang not even being in Vienna the night Schikaneder mounted its maiden voyage on the Margarettenstrasse. But the idea that he composed the overture to the Don Giovanni in less than three hours the evening before the performance does seem reasonably well documented. One could argue that this magnificent music is based on the statue scene from Act II and thus thematic ideas were already provided, but no other composer, given one hundred years and the Commendatore's themes, could ever have fashioned six minutes of such rhythmic intensity, internal turmoil and primal power.

Ivan Fischer led an energetic performance characterized by the tight, although dampened, sound of his rather small ensemble. Tensions were reasonably taut, and the playing throughout exemplary. Still, I would have wished for a little more oomph to the instrumentalism, although I understand the argument that this somewhat diluted ensemble sound is akin to what Mozart himself would have heard.

The production was semi-staged in an unusual manner which may have contributed to the wan orchestral contribution. The stage of the Rose was completely bare, leaving only the auditorium floor for Mr. Fischer and his musicians (there is no pit per se). Those of us in the front stage right enjoyed the view from the violin section. 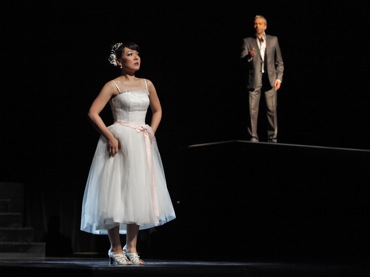 Before and during the performance, a troupe of sixteen young people, all dressed in gray and pancaked in the same hue – think Jack Haley in The Wizard of Oz – arranged themselves in various tableaux vivant that sometimes seemed relevant to the story and sometimes did not. Were they scenery, characters, chorus in dumbshow, or gimmick? At one point in Act II the phrase '"you people look like Hell" could be taken as a compliment. To quote Lawrence, they '"pour themselves one over the other like so much melted butter over parsnips".

There were no costumes, rather everyone was in some form of casual attire except Zerlina, who anachronistically wore her wedding dress throughout. Props were verboten as well, so there were no swords available for the duel, the Don killing the old man by pushing over a pyramid of the grey people that fell on top of him, creating in a delicious prolepsis his new existence as a de facto statue. Some of this acrobatic obbligato was indeed good fun, although when the athletes left the stage for a well- deserved break, this critic was not terribly eager for their return.

Vocally, this performance was all over the map. Anyone who still does not think that Mozart was a misogynist need only study the role of Donna Anna. This night we heard a spectacular one. Laura Aikin was superb, navigating this leaping about from note to note with great skill and panache, her '"Or sai chi l'onore" the most moving that I have ever experienced in the opera house. The Leporello of Jose Fardilha was also very strong, achieving just the right combination of humorous diction and deep vocal power. 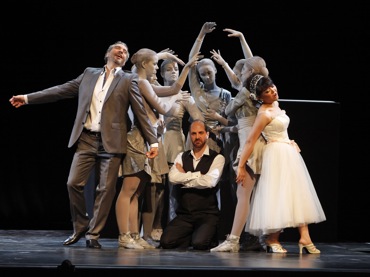 The adequate group consisted of Zoltan Megyesi as Don Ottavio and Kristinn Sigmundsson as the Commendatore, while the less than stellar echelon was overpopulated. Tassis Christoyannis as the Don was simply too cool for school, aristocratic to the point of being phlegmatic, slurring his consonants often and leaving important phrases unfinished. He may have been as confused as the audience as to whether he was supposed to be acting at all, some of his colleagues simply standing and delivering, some gesturing and emoting for all they were worth. With all those human mannequins about, there was little stage business to accomplish.

Hopefully it was just a bad night for Sunhae Im as Zerlina, who had trouble controlling her breathing and as a result lost any sense of the flow of her lyrical line. Riccardo Novaro was a tepid Masetto and Myrto Papatanasiu sharped badly in most of her dramatic high notes as Donna Elvira, although she does receive high marks for acting, if indeed she was supposed to be doing so. All was a bit of a muddle, but an enjoyable one nonetheless. For singers who might not have the right stuff for the Metropolitan house, the venue was perfect. You don't have to be Ethel Merman to play the Rose Theater.

There have been several great casts for Don Giovanni over the years, but perhaps none as stellar as that of New York's Park Theatre in 1826 with da Ponte in attendance. That evening four members of the famed Garcia family were on stage, including Maria, later internationally famous as Malibran, singing Zerlina. Of course, that was a tired, old-fashioned production with creaky clichés like sets and costumes.