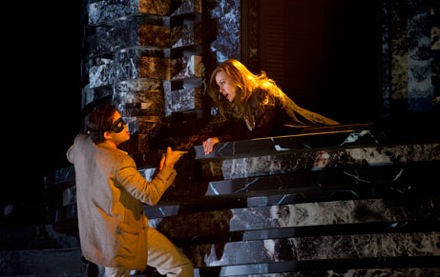 The line-up looks outstanding.  Vladimir Jurowski, Glyndebourne's music director, conducting the Orchestra of the Age of Enlightenment.  Gerald Finley singing the Don.  Kate Royal singing Donna Elvira.  Jonathan Kent, following up his wonderfully imaginative staging of the Fairy Queen of 2009, directing.  The Glyndebourne Festival's  new Don Giovanni looked like the must-see production of 2010 and was, indeed, an absolute sellout to Glyndebourne members before the turn of the year.   It will be revived, very promptly, for the 2011 Festival.

And there are, indeed, many wonderful aspects to this production (being filmed, the night I was there, for DVD).   It sounds glorious, the OAE responding to Jurowski's beautifully crafted conducting with absolute precision, wonderful internal balance and at times inspired playing.   Tempi, however fast, never sound rushed, dynamic markings in the score are observed punctiliously, the sweep and momentum of number succeeding number is maintained through the inspired series of musical archways that Mozart constructs to link his dramma giocoso into one extraordinary whole.  It also looks a million dollars in Paul Brown's multi-purpose design, the enormous cube on a central turntable whizzing round like the wheel of fate, each side being lowered in turn to reveal ever-changing perspectives within - a church, a roofscape, the Don's supper table (propped up one end at a crazy angle and eventually thrown over by the host to reveal the zombie-like Commendatore beneath).  It is handsomely (although not very imaginatively) costumed and in the course of the evening there is plenty of fine singing.  So why has the general critical reaction been so muted, and in some cases so downright dismissive of Kent's production?

Perhaps we can work towards answering that question by considering first the quality of the singing and acting performances, starting with the character on whose assumption of the role so much depends - Don Giovanni himself, sung with honey-toned, clean precision by Gerald Finley.  His sense of line is faultless, his musical attack always right on the beat (or the off beat, as occasionally happens in this score).  Nothing fazes him, his singing of his showpiece arias such as Finch han dal vino is as apparently effortless as a technical warm-up, his voice always warm and noble in tone.  And there perhaps is a clue as to why, as a whole, his performance as the Don makes less of an impression than that of many a less gifted singer I have seen in the role - Finley is perhaps too nice, too mellifluous, too much in control of his material.  It may seem perverse to cavil at such a technically perfect performance, but I found myself longing for a rougher, darker side to the character than Finley was able - or was minded - to give us.  As a result, there was an obvious lacuna at the heart of the opera. 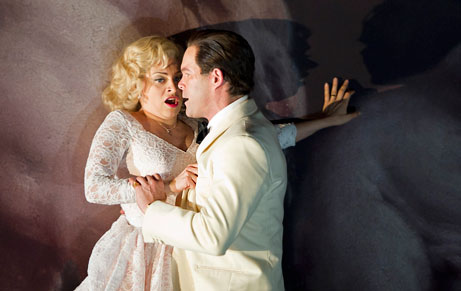 By contrast, Luca Pisaroni as his henchman and servant Leporello made a strong impression from the moment he first emerged from the door to Donna Anna's house (although why he was in underpants and vest at that particular moment continues to baffle me, unless it was intended to convey a general atmosphere of licentiousness).  His voice is big and expansive, his stage personality warm and engaging.  The Catalogue aria was not perfect technically and stage business occasionally detracted from his vocal line, but the audience warmed to this Leporello and he received a richly deserved ovation at the end.  What came through was character, both vocal and dramatic, and character in an opera like Don Giovanni counts for a lot.

Character of a different sort was also on display from Anna Virovlansky as a blonde bombshell Zerlina, looking for all the world like a young Marilyn Monroe but singing like a completely assured Pamina or Sophie, with a lovely sheen to the voice and a soubrettish timbre just to remind us how young the simple peasant girl is whom she is portraying.  Batti batti was pure delight, simple and direct but ardent and sexy at the same time.  Perfect in the role, she is a find in her first appearance at Glyndebourne.

As Donna Anna, the initial object of Don Giovanni's lust and one of the instruments of his eventual damnation, Anna Samuil gave a well-characterized performance without ever - quite - hitting the vocal heights.  She has an incisive dramatic soprano and did nothing wrong all evening, projecting her vocal line forcefully in the ensemble passages, but I neither warmed nor thrilled to her as I have to some great Donna Annas in the past.  Opposite her, William Burden was as steady and as foursquare as Don Ottavio is supposed to be.  I liked his full, open tenor sound and he rode the orchestration given to his set pieces (in the Vienna revision given by Glyndebourne we lose quite a chunk of the role) with ease, but the part, it has to be said, is often a thankless one and Burden brought no special insights, vocal or dramatic, to it.

That leaves us with the least satisfactory vocal performance of the evening, all the more disappointing because the very opposite had been much anticipated: that of Kate Royal in the pivotal role of Donna Elvira.  For much of the evening, she simply looked and sounded tentative.  Her costumes were drab and unbecoming, her stage blocking and movement completely at variance with the avenging woman possessed of Da Ponte's and Mozart's imaginations.  Anyone who has heard Royal elsewhere will know that she can both act and sing much better than this, so the verdict must simply be that she was badly miscast in the role.  As it was, tonal bloom and vocal firepower were both lacking, a big handicap for the character who has to convince us that she has got the measure of the Don and does not intend to allow him to elude her clutches. 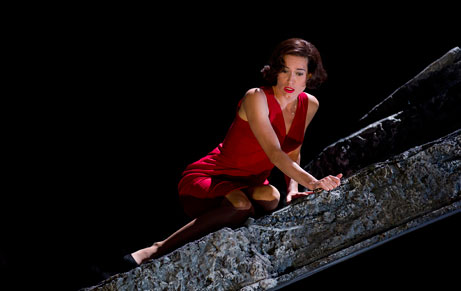 So how and why does the production fail to stack up as an integrated, well conceived Don Giovanni?  My first criticism is that it is simply too monumental, the central (and brilliantly ingenious) cube somehow sapping energy from the performers onstage, actually slowing things up rather than facilitating the seamless transition from scene to scene.   The music has irresistible onward force, the progression of scenes should be linear: we are for the most part in that indeterminate space between buildings, between rooms, as the Don heads on breathlessly towards his doom.  Well, somehow a turntable set fails to give us that, we are rooted to one spot in the designer's imagination, and even as we admire the ingenuity and the stagecraft of it all, we lose dramatic momentum.  So the brilliant effect of plunging the house lights into total darkness as the great D minor chord launches the overture is dissipated as we, metaphorically, stay where we are as the stage action unfolds.  It all just feels too heavy, too contrived.

As the show runs on – particularly on tour this autumn – I am sure it will gather pace around the edges.   As said at the outset, there are many fine things in it, to be admired and enjoyed.   But as the overwhelming theatrical experience that Don Giovanni ought to be, it is lacking.   A case for once where the sum of the parts failed to make a satisfactory whole.