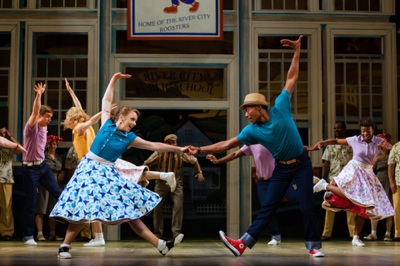 Composer Meredith Willson was so worried his listeners might miss words during the briskly paced patter ("talk-song") sections of The Music Man, he rigged a string of microphones that spanned the entire front floor of the stage.  Too bad he never got to hear his Broadway masterpiece in the listener-friendly venue of the Alice Busch Opera Theater — whose strict policy forbidding amplification is something I expect he could have lived with.  And rather happily, at that.

The cast of Glimmerglass Festival's opening-night performance Saturday spoke in strong, booming voices that in the acoustical splendor of this theater came across in crisply articulated syllables that drew attention to Willson's crafty, mostly-unrhymed lyrics.  Between sections of dialog, large ensembles of colorfully outfitted singing-dancing actors and actresses (comprised largely of Glimmerglass Young Artists) sang and danced their way gleefully across the stage and down the aisles.

All in all, this Glimmerglass production directed and choreographed by Marcia Milgrom Dodge was as visually appealing as it was vocally gratifying.  And fun from start to finish.

The Music Man is, from soup to nuts, a product of Willson's own cooking.  He wrote the story, lyrics and music, and tinkered with the project for eight years and some 30 revisions.  When finished to his liking, the musical comedy became an unqualified success, running for 1,375 performances and winning five Tony Awards including "Best Musical" of 1957 (beating out the mighty West Side Story).

Yet for all its popular appeal, The Music Man contains precious few tunes (notablySeventy-Six Trombones and Till there Was You) capable of lingering in your musical memory long enough to hum back on the trip home from the theater.  And in spite of such stand-alone hits as It's beginning to look a lot like Christmas, Willson can hardly be considered a tunesmith along the lines of Irving Berlin, George Gershwin or Jule Styne.  If he was going to make a hit on Broadway, he would have to find an alternate musical route to get there.

In The Music Man, Willson arrived at a novel technique whereby spoken dialog — delivered in a catchy rhythmic pattern — continues alongside a melodic instrumental accompaniment until the spoken words "catch up" to, and join with, the melody line.  This technique is taken to the extreme in the musical's opening number, Rock Island — a pitchless, spoken-only rhythmic number delivered by travelling salesmen on a moving train that calls for rapid dialog set to relentless 16th-notes that mimic the "chug-a-chug-a" motion of the train.  No melody, no pitches, no problem: The era of rappers had begun.

The storyline, set in River City, Iowa in 1912 (shifted in this production to 1946), centers around a slick traveling salesman and inveterate con man, Harold Hill.  "Professor" Hill travels from town to town carrying a large suitcase and lots of moxie.   He sells musical instruments and marching band uniforms to schoolchildren's parents under the guise of establishing a "boys band" in their community, but after collecting the money he skips town before they realize he can't read music.  When the "professor" reaches River City he soon falls for the town librarian, Marian — a real music teacher who can see through the scam.  Through flattery and praise, Harold endears himself to River City's students, parents and school board — all of whom begin to shed their drab lives and reinvent themselves into the beautiful images of their dreams.  When Marian sees her shy, introverted younger brother come out of his shell after Harold hands him a shiny new cornet, she recognizes that the faux professor who can't read music somehow brought harmony to River City after all, and decides not to expose him.

Dwayne Croft forged a Harold Hill who is as lovable as he is unctuous.  No easy task.  Aided by his solid vocal presence and a wardrobe that includes a slick double-breasted suit with spats, Croft is a confidence man who oozes confidence.  All eyes are on him when he takes stage, pitching his instruments and sermonizing the crowd about the dangers of the town's new pool table.  When Croft sheds his plaid jacket, dons a drum major's cloak and gets the townspeople marching to Seventy-Six Trombones, the image of the Pied Piper is unmistakable.  By the beginning of Act Two, I was ready to buy a used car from this man.

Croft was less credible as the love interest to Marian, principally because his Harold Hill remains a one-dimensional character who cannot switch gears and show any appreciable degree of vulnerability.  When at the end of the show he fesses up to the boy Winthrop and admits he's a liar and a fraud, there's little indication of contrition or introspection.

There was nothing to doubt about Croft's singing.  His operatic baritone was sufficiently malleable to reshape itself to the demands of Broadway, as he so aptly demonstrated in Ya Got Trouble and Marian Librarian.  And his attractive speaking voice was invariably clean and articulate.

As Marian, Elizabeth Futral has a well-trained operatic voice as well, but unlike her male counterpart, the soprano could not muster a stylistic switch from polished to pop.  The timbre of Futral's high register in particular reveals the unmistakable signs of her extensive training, and when she reached for the top register it sometimes sounded as if she were on the verge of switching roles to Violetta in La Traviata.

Beyond the apparent identity crisis, Futral's soprano is lovely to listen to.  I especially enjoyed Till There Was You and her touching duet with Croft at the reprise ofGoodnight my Someone.  And Futral's speaking voice, while not perhaps as crisp in diction as the male leads in this production, remained pleasant and intelligible.

The standout minor character in this production was Josh Walden, a gifted singing-dancing comic who played the role of Harold Hill's accomplice, Marcellus Washburn, to perfection.  Waldron's enthusiastic delivery made for some hilarious sight gags, and his fancy legwork in the dance numbers was a howl.   He all but stole the show.

As Marian's excitable Irish mother Mrs. Paroo, Cindy Gold fashioned a strong-willed character who played matchmaker to Marian and her would-be suitor, Professor Hill.  Her duet with Futral in the clever song that spins out of rising perfect-fourths during Amaryllis's piano lesson (If You Don't Mind My Saying So) was alone worth the price of admission.

Glimmerglass Young Artist Megan Ort, as the mayor's older daughter, Zaneeta, catches the eye immediately and stands out from the rest of the ensemble dancers at the school gymnasium during the rousing Seventy-Six Trombones.  As an actress, Ort handsomely projects the image of the love-struck teen to fellow student and town prankster Tommy Djilas, played by Allan K. Washington.

The Pick-a-Little Talk-a-Little ladies, cohorts of the mayor's wife comprising Glimmerglass Young Artists Samantha Korbey, Lisa Williamson, Stephanie Lauricella and Amanda Opuszynski, proved a hilarious assortment of village gossips.  When Harold Hill inquires about the town librarian, Marian, they waste little time bending his ear about her shameful promotion of "dirty books," which turns out to be Chaucer and Balzac — or as the mayor's wife is fond of pronouncing it, BAAAAL-zac.  The five ladies sang with crisply articulated diction that rendered their rapid-fire lines intelligible.

The four ubiquitous school board members who under the spell of the slick professor morphed from a bickering assortment of adversaries to an inseparable barbershop quartet (played in appropriately syrupy fashion by Glimmerglass Young Artists Eric Bowden, Adam Bielamowicz, John David Boehr and Derrell Acon) provided a steady diet of laughs and moans throughout the show.  The four devoted singers rehearsed extensively with a barbershop coach to capture the proper cornball demeanor of this type of ensemble, both in vocal technique and in manner of onstage deportment.  Still, by the quartet's final number, Lida Rose, I was fighting the urge to hurl tomatoes at them.

The roles of the children — Amaryllis (Marian's young piano student, played by Aria Maholchic) and Winthrop (Marian's lisping younger brother, played by Opie Taylor look-a-like, Henry Wager), boosted the "cuteness factor" of the production considerably.  Maholchic played the piano without benefit of a stand-in, while the listeners all but adopted Master Wager after he ignited the crowd in Gary Indiana. 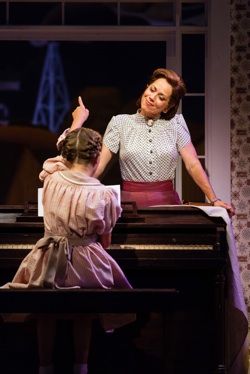 Among the non-singing roles, Jake Gardiner, as the town's overly pompous Mayor Shinn, drew a steady stream of chuckles from his near-constant state of outrage over the rapidly changing state of affairs in his otherwise sleepy hometown of River City since the arrival of the mysterious newcomer.  As the "straight man" in this cornucopia of comedic characters, Gardner spoke in a boisterous, authoritative voice that commanded attention.

Director and Choreographer Marcia Milgrom Dodge's dance numbers were appropriately snappy and extrovert but included more subdued routines as well, such as the quiet soft-shoe in the town library during the crafty Marian the Librarian.  "What do you want to take out?" an impatient Marian asks Harold at the checkout desk.  "The librarian," he answers.  The most visually appealing dance number came duringShipoopi — the name given to a new dance Professor Hill introduces to the students that in the current production leads to a rousing, cowboy-style square dance.

Dodge's stage direction included lots of sight gags, and during the singing numbers she invariably kept the background characters in-motion.  Her decision to update the action from 1912 to 1946 (in order, she writes, "… to access a closer nostalgia") nevertheless creates some unintended paradoxes.  The year of Hill's supposed graduation from the (fictitious) Gary Indiana Conservatory, identified several times throughout the show as having occurred in 1905, would have brought the good professor to about 62 years of age — hardly a credible romantic interest to Marian.

James Noone's clever yet economical mobile sets were ingenious, taking the listeners on a journey through River City that included the town's main street intersection, train station, school gymnasium, beauty parlor, library, and surrounding farmlands.  Changes in location were accomplished by sliding panels left and right and raising backdrops up and down — none of which impeded the action onstage.

Leon Wiebers's colorful costumes were hardly confined to Dodge's vision of the 1940s, and often transcended the boundaries of the "swing era" to suggest 1950's rock and the iconic Mayberry of Andy Griffith fame.

Conductor John DeMain's mostly vivacious tempos kept pace with the kinetic stage action and kept the tightly knit chorus of townspeople and schoolchildren in-sync with the pit orchestra during larger ensemble numbers such as Seventy-Six Trombones, Wells Fargo Wagon and Shipoopi.  A full strength Glimmerglass Festival pit orchestra — a rarity in revivals of Broadway shows — was up to task in Willson's strongly rhythmic musical score.

Audience reaction to the production was overwhelmingly enthusiastic, and rightly so.  I wouldn't mind seeing it a second time — even if it means buying yet another cornet from Professor Hill.