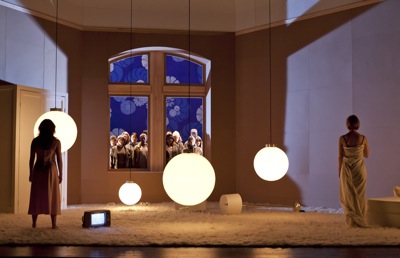 Il sogno di Scipione (The Dream of Scipio) was the fifth of Mozart's operas, composed (unbelievably) when he was 16. The libretto was written by Pietro Metastasio, after Cicero. It was presumably first performed in Salzburg, in May of 1772. The archbishop for whom it was written had died, so the work was dedicated to the incoming archbishop, but no one is sure that the opera was performed in 1772, as there was no mention of a performance, in Salzburg or anywhere.

This work is rarely staged, though there was a European production recently – staged as a cocktail party. This production took a slightly different approach.

The opera was produced in New York by the enterprising Gotham Chamber Opera some ten years ago; it was revisited by the same director (Christopher Alden) and conductor (Neal Goren) this time. The plot concerns a visitation (in a dream) to Scipione, a Roman consul-elect, of two goddesses, Fortuna and Costanza. These two are represented as contemporary girls, endlessly fussing with their hair and make-up. Fortuna has a very hard time making up her mind what to wear, trying all sorts of stylish outfits from an ominous wardrobe. All this was amusingly set-up, first with the goddesses in bed with Scipione, who for most of the opera is dressed in pyjamas.

There are other visitations, coming from the wardrobe, of Scipione's father and adoptive grandfather, one in a hospital gown and the other, crippled, in crutches. Both were presumably dead, and Scipione is startled to see them, naturally. The father and grandfather tell Scipione to live virtuously. He needs to chose between the two goddesses, and he finally decides for Costanza, to the wrath of Fortuna. The father and grandfather were quite well sung by Chad A. Johnson and Arthur Espiritu, and made the most of their compromised conditions – a nurse attended to Mr. Johnson. 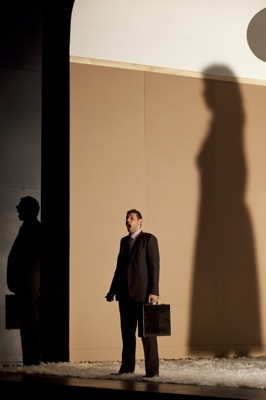 It is all quite tuneful, but with none of the sheen of Mozart's future operas or the finesse of the melodies to come. The Scipiones were originally three tenors; in this version these were reduced to one, Michele Angelini, who triumphed in his difficult coloratura roulades. Constanza and the Fortuna were very well-sung by Marie-Eve Munger and Susannah Biller, and a third female character, Licenza, was enthusiastically sung by Rachel Willis Sorenson, who carries the end of the opera, with the chorus.

The set, by Andrew Cavanaugh Holland, was a wall of wrapping paper, with floating lighting fixtures, to denote at one point the planets, and a large white rug. Various modern gizmos were upturned, including a television set, and other lighting fixtures.

The costumes, by Fabio Toblini, were mostly for Fortuna, who kept trying on outfits endlessly. At the conclusion of the opera Scipio puts on a suit, and takes his briefcase and exits, through a tear in the wall. At one point, we were treated to Costanza doing a series of yoga-esque exercises – Scipione was too bored (or tired) to copy her.

Mr Goren conducted the score very well, but unfortunately I was sitting directly in front of a cello and a harpsichord (not in the pit) which managed to drown out the orchestra much of the time, for me.

This intrepid company has won a prestigious place in the hearts of adventurous opera-goers in New York City. Il sogno di Scipione might not have been as interesting as the prior production, Dark Sisters, but you can count on this company offering something arresting and unique nearly every time.