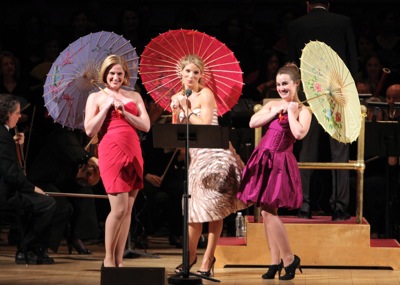 The Mikado is possibly one of the most frequently-played operettas world-wide. This season there was a new production at the Gärtnerplatz in Munich, among other venues. The reasons for its enduring popularity are not difficult to fathom: it has a hilarious libretto and a glorious score, courtesy of Gilbert & Sullivan in 1885, and first produced at the Savoy Theatre in London.

The main attraction of the Collegiate Chorale is its huge chorus, with far more people than normally found in a production of this operetta. The male voices glistened in the opening chorus, "If You Want to Know Who We Are", and the female contingent did wonders with their first number, "Comes a Train of Little Ladies" and a lot of other numbers, as well. The sound of the finales to both acts was aggrandized by the plentiful choristers.  The shout of "O Ni! Bikkuri Shakkuri To!" in the first-act finale (to drown out Katisha's frantic attempt to expose the son of the Mikado) was robust and rousing. The "Miya Sama" march in the second act also sounded fabulous, with its accentuated Japanese diction.

The casting of this Carnegie Hall production was entrusted to Broadway singers; there was very little attempt to make it sound British – it is of course a British operetta, and all my years of seeing and hearing the D'Oyly Carte Opera Company in this work went for naught here. (Even the recent DVD of the Australian Opera production attempted an English style).

However, Jonathan Freeman, as Pooh-Bah, and the Mikado himself, Chuck Cooper, had very good, and slightly English diction.  Fortunately, the Mikado's song was left alone; but not Ko-Ko's "Little List", which was strewn with political jokes – I suppose we have to expect this nowadays. The rest of the cast were resolutely somewhere in the U.S.A. The voices themselves were fine, but the romantic couple, Jason Danieley (Nanki-Poo) and Kelli O'Hara (Yum-Yum) did not give an entirely satisfying rendition. However, O'Hara's "The Sun Whose Rays" was resplendently brought off, and Danieley's numbers, particularly the love duet in Act I, were very nicely done.  The coarsest player was Christopher Fitzgerald, as Ko-Ko, who brought very little shy elegance to his part, and spent a lot of time shouting his lines (although this was appreciated by the audience, for some reason). 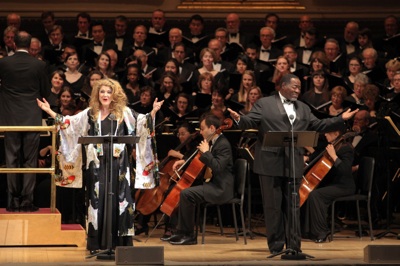 The big surprise was Victoria Clark as Katisha. She gained fame in the musicals Titanic and The Light in the Piazza, and I had seen her as an excellent Nadina in a Connecticut production of Oscar Straus's The Chocolate Soldier. (The cover of the Playbill featured a different production of the Straus operetta, from the 1940s, with Allan Jones and Helen Gleason, as a tribute to Carnegie Hall's rare operetta outings.)

Clark certainly seized every opportunity to be manically comic. She played with chopsticks in her wig, she conducted the orchestra with them at the end of the first act, and near the second-act finale managed to throw Ko-Ko off the stage, into the parquet. Her voice was not the typical contralto one expects as Katisha, rather a mezzo-soprano register. She made an impression with the first two number in the first-act finale ("Oh fool that fleest" and "The Hour of Gladness"). She was devastatingly funny. It is rare one gets a truly humorous Katisha.

Freeman, the Pooh-Bah, has most of the funniest lines in the libretto, and delivered them splendidly – particularly the "Chop it off! Chop it off!" in Act II. The singing and dancing in "So Please You, Sir, We Much Regret" in the first act also was marvellous, augmented by the female chorus. The roles of Pitti-Sing (Lauren Worsham) and Peep-Bo (Amy Justman) were  nicely sung. Steve Rosen made his points with "Our Great Mikado, Virtuous Man", his only real solo.

The conductor, Ted Sperling, offered a scrappy overture, which wans't really by Sullivan at all – rather by Hamilton Clarke, the arranger. Things got much better once the operetta itself was presented. I have the feeling that there was not very much rehearsal time offered to the orchestra and singers, as some of the dances seemed very much constricted. Still, we got the twirling parasols in "Three Little Maids from School" that were a hallmark of the D'Oyly Carte company.