Classical music highlights of the forthcoming year in the United States 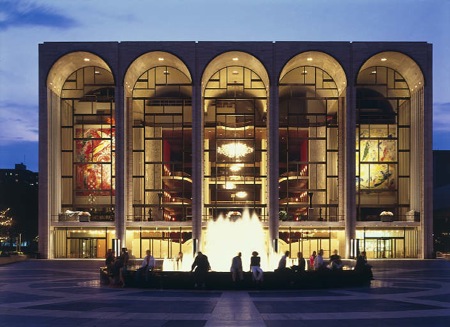 Where to start picking the 2010 highlights of the North American musical world? It's truly a challenging task – but interesting and entertaining too.

It's difficult to imagine a most exciting month than January in New York. For opera lovers, the Metropolitan Opera is definitely the place to be. Renée Fleming will return for one of her signature roles, the Marschallin, in Der Rosenkavalier, together with Susan Graham and Kristinn Sigmundsson. In addition to that, there's a legendary debut: after five decades of successful career, singer, conductor and artistic director Plácido Domingo will take up his first baritone role as Simon Boccanegra in Verdi's homonimous masterpiece. The cast for this Boccanegra is a stellar one: it includes Adrianne Pieczonka, Marcello Giordani, and James Morris. Legendary music director of the Met James Levine will conduct.

February is a shining month too. After successful performances in Covent Garden and Vienna, and after the American debut in San Francisco, Laurent Pelly's production of La fille du régiment arrives at the Met. The cast is excellent and features Juan Diego Flórez and Diana Damrau. Something will make this Fille a particularly special occasion: Dame Kiri Te Kanawa will be on stage in the speaking role of Duchess of Krakenthorp.

In March, Simon Keenlyside and Natalie Dessay will perform in a production of Hamlet directed by Patrice Caurier and Moshe Leiser, that was a success when it opened in Covent Garden. Louis Langrée will conduct.

Debora Voigt will sing in Der Fliegende Hollander in April. Then, a new production of Shostakovic's The Nose will be on stage. This production is definitely a special one: renowned visual artist William Kentridge participated in the conception of the staging, and acclaimed conductor Valery Gergiev will lead the orchestra. The cast features baritone Paulo Szot, who makes his Met debut after winning a Tony Award for South Pacific.

The Met is not the only place for high-quality music performances. Among the many excellent venues, the New York Philharmonic is certainly a place where one cannot go wrong, and the 2010 season confirms that. Yefim Bronfman is one of its protagonists. After having performed worldwide in the fall, in January he will return to New York to play Prokofiev's Piano Concerto No. 2. Music director Alain Gilbert will conduct. In March, András Schiff will play Brahms' Piano concerto No.1 and Hindemith's Symphony in E flat. Riccardo Muti will lead the NY Phil in several performances of Beethoven's Violin Concerto and Franck's Symphony in D minor. Vadim Repin will join them on the violin. In addition, in April, Muti will conduct Mozart, and Boccherini's Cello Concerto in D with Carter Brey.

The presence of Valery Gergiev and the Mariinsky Theatre Chorus makes April a special month at the the NY Phil. With Gergiev, the Russian Stravinsky series will start. One of the highlights within this series is Stravinsky's Violin Concerto with Leonidas Kavakos, and a performance of Oedipus Rex featuring Waltraud Meier, Anthony Dean Griffey, Mikhail Petrenko, Alexander Timchenko.

The musical theatre scene is shining too, as one can imagine only thinking of Broadway. In particular, the NY Phil will celebrate Stephen Sondheim's 80th birthday with performances of his masterpiece and also of some of his most rarely heard music. Stars of the musical theatre will participate in these celebrations. Among them, there will be Michael Cerveris, Victoria Clark, Jason Danieley, Nathan Gunn, George Hearn,

Another interesting initiative is the concert A guide to German Romanticism. This event will take place in April and it will feature superstar Tom Hampson, who is artist in residence during the 2009-10 season. He will be both speaker and singer for this series. Last but not least, Royal Opera House artistic director Antonio Pappano will be joined by Joshua Bell in a performance of Mozart's Symphony no 31, Paris, and Bruch's Scottish Fantasy. 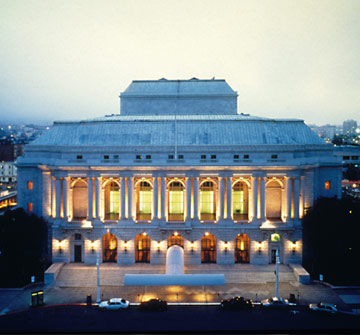 For music lovers in the West Coast, 2010 looks like an exciting year too. After a successful beginning of the season with new music director Nicola Luisotti, the San Francisco Opera will present new performances in June. Gounoud's Faust opens at the beginning of the month, in a Lyric Opera Chicago production. The cast features amazing Patricia Racette, who shone during her triple bill in Il trittico in September. Together with her, there will be Stefano Secco in the title role, and John Relyea. Maurizio Benini will conduct.

Still in June, Debora Voigt will star in La fanciulla del west, marking the return of Puccini's masterpiece – set at the time of the California Gold Rush – after thirty years in the West Coast. Salvatore Licitra and Roberto Frontali will join Voigt, and Luisotti will conduct. This performance is special for another reason: La fanciulla was premiered in New York City in 1910 and the SF Opera performances will celebrate its 100th anniversary.

A little later in the season, the SF Opera will present Die Walküre, in a famous co-production with the Washington National Opera conceived by Francesca Zambello. The cast includes Nina Stemme as Brunnhilde, Eva-Maria Westbroek, Janina Baechle, and Mark Delavan. Donald Runnicles will conduct.

A look at the San Francisco Symphony 2010 season will show that music lovers in Northern California are really spoilt for choice. Composer in residence George Benjamin is one of the protagonists of the New Music series from 7 to 17 January. This series is part of Project San Francisco, one of the initiatives for the SF Centennial. Other musicians involved in these celebrations are Yo-To Ma, artist in residence, who will perform both alone and with other prestigious performers such as Emanuel Ax and Colin Jacobsen. One of the concerts I am particularly looking forward to is a performance of Brahms' Concerto for violin and cello with Yo-Yo Ma and Jacobsen.

In February, Riccardo Chailly and the Gewandhaus Orchestra will play Beethoven's Symphony No. 7 and Emperor Concerto with Nelson Freire on the piano. The following month, music director Michael Tilton Thomas will lead the SF Symphony for Mahler's Resurrection. Later in the month, Valery Gergiev, the Mariinski Orchestra and pianist Denis Matsuev will perform Berlioz' 'Royal Hunt' and 'Storm' from Les Troyens, Rachmaninoff's Piano Concerto No. 3, and Shostakovitch's Symphony No. 15. 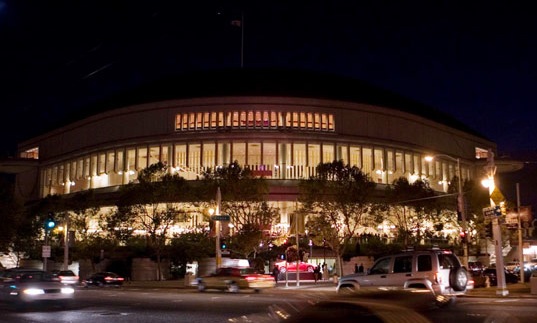 Then, the SF Symphony will go on tour. They will perform many North American states – Illinois, Michigan, Pennsylvania, D.C., and New York. But the audience at the Davies Symphony Hall will be able to enjoy wonderful music also in the absence of the resident orchestra: chief conductor of the Royal Liverpool Philharmonic Orchestra Vasily Petrenko will conduct pieces by Grieg and Shostakovitch in multiple performances at the beginning of the month.

A date not to miss is 10 April, when acclaimed music director of the Los Angeles Philharmonic Gustavo Dudamel will conduct his orchestra for John Adams' City Noir and Mahler's Symphony No.1. On the following day, the LA Phil will perform with Jean-Yves Thibaudet. The programme includes Bernstein's Symphony No.2, The Age of Anxiety, and Tchaikovsky's Symphony No.6, Pathétique.

Surely one of the most exciting highlights for Southern California musical world is the LA Opera Ring Cycle, from 29 May to 26 June. This is a new production directed by Achim Freyer. The cast of this company premiere is exciting: James Conlon will conduct all the performances and a cast of Wagnerians will take up the singing roles. In the Das Rheingold, Vitalij Kowaljow will play Wotan and Michelle DeYoung will be Fricka. In Die Walküre, the untiring Plácido Domingo will be Siegmund. He will be joined by Linda Watson as Brunnhilde. In Siegfried, the title role will be taken up by John Treleaven.

It's not only this new Ring Cycle that makes the LA Opera 2010 season shine. With Domingo as its artistic director, the LA Opera has presented an exciting first part of the season. One of the highlights of the spring programme is certainly the American premiere of Franz Schreker's Die Gezeichneten (The Stigmatized). This is part of the critically acclaimed Recovered Voice series. This opera will play from 10 April, with Robert Brubaker, Anja Kampe and Martin Gantner. Conlon will conduct. 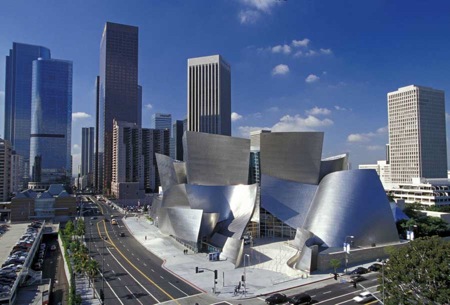 The Los Angeles Philharmonic is enjoying its collaboration new artistic director Gustavo Dudamel. Their programme is broad and interesting, and several musical styles are represented. As for classical music, in January Lorin Maazel will conduct Bruckner's Symphony No. 8. In different performances, he will also conduct Sibelius and Strauss.

In March, Conlon will lead the LA Phil in Prokofiev's Simphony No. 1, the Suite from Romeo and Juliet and, by the same composer, the Piano Concerto No.1 with Lise de la Salle. Young and acclaimed conductor Robin Ticciati will visit the Walt Disney Concert Hall too and, together with Lars Vogt at the piano, they will perform pieces by Sibelius, Grieg, Lindberg and Edgar. In April Semyon Bychkov will conduct Mahler Symphony No. 5. Finally, during the same month, Dudamel will present a performance of Estévez' Cantata Criolla.

The jazz scene at the LA Phil is exciting too: Dee Dee Bridgewater and Al Jarreau will be at the Walt Disney Concert Hall in March, and Sonny Rollins will be there in May. As for world music, among many concerts it's interesting to see that Keyhan Kalhor and Hossein Alizadeh will offer a performance of Persian music in February.

In the Midwest, the Lyric Opera of Chicago has an exciting programme. One of the highlights is certainly L'elisir d'amore with Nicole Cabell, Susanna Phillips, Giuseppe Filianoti, Frank Lopardo, and Alessandro Corbelli. Vincent Liotta will conduct. In February and March, Berlioz' La damnation de Faust will be on stage, in a production featuring Paul Groves, Susan Graham and John Relyea. Sir Andrew Davis will lead the orchestra. During the same period, superstars Danielle de Niese as Susanna and Joyce DiDonato as Cherubino will bring Le nozze di Figaro alive. Sir Andrew Davis and Leonardo Vordoni will share the podium.

Finally, going back to the East Coast, Philadelphia's many prestigious venues offer a selection of high-standard performances. Among them, the Philadelphia Orchestra has an amazing spring and summer season. Among the many interesting events, the recitals featuring Karita Mattila are certainly a highlight. These concerts in January will mark Mattila's Philadelphia debut. She will sing pieces by Mahler, Strauss and Martinu. Jiri Behlolavek will conduct.

In March, Dutch violinist Janine Jansen will join the Philadelphia Orchestra for Brahms' Violin Concerto. Later in the season, chief conductor Charles Dutoit will lead the Orchestra for Shostakovich's Symphony No. 11. Then, Osmo Vänskä will conduct pieces by Sibelius together with pianist Jean-Frédéric Neuburger. Together with Sibelius' Symphony No. 2, they'll play Liszt's Piano Concerto No. 2 and Aho's Minea. In April, Emanuel Ax will perform Beethoven's Piano Concerto No. 2, Ravel's Mother Goose Suite and Stravinsky's Petruska with the Orchestra and Dutoit.

It seems clear that, anywhere you are in the USA, there's really plenty of choices for an exciting musical 2010.

Have your say: discuss this article in our Forum.