Interview: Joyce DiDonato on I capuleti, bel canto and the opera industry

'I wish the opera industry would put out the message: "Look, opera is the Olympics of the art world. You have no idea what you're missing if you're not sitting in our theaters!"' 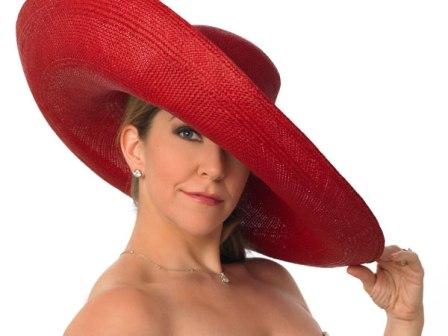 American mezzo-soprano Joyce DiDonato returns to the San Francisco Opera this month as Romeo in I capuleti e i Montecchi. The SFO's audiences will remember her thrilling Rosina in the 2003-04 production of Il barbiere di Siviglia - a role she has since recreated countless times in her imitable manner - as well as her bold debut as Der Rosenkavalier's Octavian in 2007. Her rise to prominence could not be much more complete. DiDonato has done a phenomenal amount in the last decade, and is routinely described as one of the most important singers of her generation. This year she adds to her list of accolades a Grammy and a recent Classical BRIT Award nomination for her solo album Diva Divo.

In 2008 DiDonato sang Romeo alongside Anna Netrebko's Giulietta at the Paris Opéra Bastille. In the current production at the San Francisco Opera, her Romeo is friend and colleague Nicole Cabell. We discuss what this collaboration is like. 'This experience is amazing. I've known Nicole for several years but only ever socially: we've never had the chance to sing together until now. But we knew this production was coming up and have both been so excited about it.... We just have such wonderful chemistry. Nicole is such a remarkable human being.'

She continues to discuss the role of Romeo itself: 'The role requires absolute vocal command. Stamina is a big issue: Romeo is on stage almost the whole night, and that's a big demand. But it's so fulfilling for me, it's so rewarding to be able to open up and do these emotional lines.'

Given that DiDonato made her name as a Rossinian singer, I am curious about the distinction she notices between the music of Rossini and Bellini when she performs this role. 'I think Bellini is a bit more raw than Rossini... Rossini's quite a lot about vocal dazzle, but the emotional content is really deep in Bellini. And the singing that's required for Romeo is markedly heroic... and that somehow feels a little bit more grown-up!'

What about the notion that Rossini, Bellini and Donizetti are the so-called bel canto composers? Does she take a particular approach to their music which she doesn't to other composers' music? 'The idea behind bel canto is that the voice is supreme. As a bel canto singer you should be able to do everything – the trills, the mezza voce, every dynamic – and be really flexible with the voice. Handel is the prime example of a bel canto composer, because he requires you to do everything with your instrument. And that complete command is really where I come from as a performer. I want to be able to do anything with the voice that the expression demands, in music from the baroque era to the twenty-first century. For me, singing in general is bel canto.' 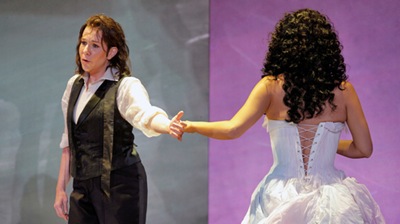 Our conversation continues to center on broad ideas, and it is DiDonato who drives our exchange in that direction. She discusses the operatic industry with particular passion and purpose. 'I wish the opera industry would put out the message: 'Look, opera is the Olympics of the art world. You have no idea what you're missing if you're not sitting in our theaters!' I'm frustrated that there is so much apologizing going on (along the lines of: 'we know the plots are a little bit convoluted' or 'we know we have to make opera more relevant and more theatrical.'). Opera is as theatrical as it gets! I would rather have the powers that be take a positive approach.'

'I will say we haven't found the way to bring opera solidly into the twentieth-first century. We have been sitting on our laurels for a long time as an industry. We've taken it somewhat for granted that opera will be around for ever. But this isn't true at all theaters. Darren Keith Woods has totally revamped the Fort Worth Opera and changed the whole format so it's accessible to audiences, and they're now doing world premiers. The same is true for the Minnesota Opera.'

However much DiDonato has made her name as a Rossinian mezzo, she thrives on premiers. Her Sister Helen Prejean in Jake Heggie's recent opera Dead Man Walking received remarkable praise: some even described it as the apogee of her career. What does she understand the value of new works to be for audiences, and the operatic industry, though? 'Premiers are necessary, we have to do them. And it's not just to save the theater. The arts have always been a reflection on society. With the arts we shine a spotlight on humanity and ourselves to understand better the culture around us, and to understand ourselves. Take for instance Dead Man Walking. It is an opera that gives society a safe place to explore all the sides of a very complicated, heated issue: the death penalty. That's one of the main reasons to have new works. They help us open our minds to all sides in an argument, and in a safe, unpolitical, unpartisan way.' 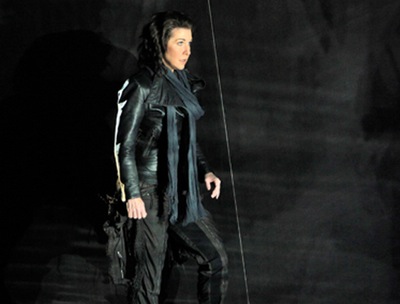 Can new productions of canonical works achieve a similar resonance with contemporary audiences? 'You know, they can. I'm all for modern productions: let's make the production interesting, and let's question ourselves in a relevant, modern way! But there is risk involved. The staging has to make sense in terms of the story. The why has to be really clear. Because as an industry we are responsible for ensuring that if somebody comes into the theater for the first time, what they see is really compelling. It can't be stale and outdated. Now, it can be stale as an updated production or as a traditional production. And it can also be totally gripping and life-changing as an updated or a traditional production. The bottom line is that the production has to tell the story in an honest, compelling way. I don't care what costume they put on me, I just want it to be really relevant and convincing.'

Our conversation comes to settle on details. What roles will we see her in next? 'I've done so many new roles recently! My priority for the next couple of seasons is to go back and revisit ones that I've only done once or twice. I want to let the process of osmosis happen: I want those roles to grow within me. So I'll be spending time with Clemenza and Rosenkavalier, among other operas.'

To close, I ask DiDonato about her career 'then and now.' How has she altered her musical and dramatic approach to roles across her career? 'My approach to a role has always been the same: I want it to be believable and I want it to be authentic. I want my singing and technique to be entirely at the command of my expressive and musical desires. But I have grown over the years. Experience means so much. It gives me confidence, and a solid foundation. It allows me to trust my instincts, and to give myself permission to take risks. Interestingly enough it seems that the learning process has been about shedding layers: over time, I have become freer and freer as a singer, a performer and a person. Some of this is inevitable: as we get older we get more secure in ourselves, and we spend less time and energy on the superficial mundane things we devoted lots of energy to when we were younger!'

Join the debate: if you have any comments on this or any of our articles, visit our forum