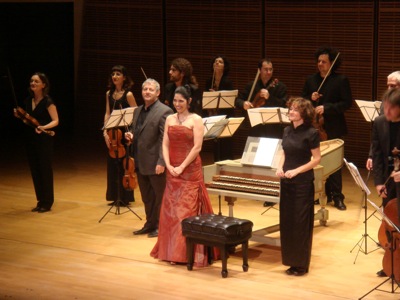 Living in a city as rich in musical diversity as New York, it's easy to become slightly blasé about the wealth of opportunities for hearing classical music in live performance. Therefore, it was an uncommon thrill to be present when Fabio Biondi and his superb ensemble Europa Galante took the stage and shattered expectations at Zankel Hall. Along with Baroque superstar Vivica Genaux, Biondi imbued selections by Vivaldi and his contemporaries with such depth of color, emotion, and spontaneity that it often seemed as if the music was being brilliantly improvised in the moment for a sold-out hall of enthralled listeners.

Biondi is well known to early music aficionados, with dozens of impressive recordings to his credit, including music by Handel, Boccherini, Scarlatti, Cavalli, Telemann, and especially Vivaldi. In live performance, his virtuosic violin playing and refined, yet spirited leadership of the period instrument ensemble Europa Galante were profoundly impressive. But it was his apparent lack of ego, combined with a deep commitment to the tenets of period performance practice, that made the deepest impression. Leading from the violin, Biondi gave life to melodies composed nearly three centuries ago, offering his listeners a fascinating glimpse of musical tastes in early 18th-century Venice. Despite the strictly formulaic structures popular at the time, Vivaldi consistently strove to stretch the public imagination with his compositions, and Biondi has clearly made it his ambition to celebrate the composer's remarkable ingenuity. Following his lead and equally committed to his stylistic vision, Genaux and Europa Galante poured forth arias and concerti rich in detail and crackling with energy.

At first, the slightly boxy acoustic of Zankel Hall seemed to muffle the brilliance of the string playing somewhat, and during the opening Sinfonia in C Major, RV 116, I wondered if the musicians themselves were finding some unanticipated discomfort with the performance space. Ensemble was a bit ragged and there were occasional problems with intonation throughout the brief, three-movement introduction. Fortunately, these problems quickly dissipated and from Genaux's first entrance to perform 'Quell'usignolo' from the opera Farnace, the ensemble proceeded with taut coordination and gorgeous interplay among the fourteen instrumentalists.

The program was expertly designed to give Genaux breaks at regular intervals: seven arias (all culled from her most recent recording 'Pyrotechnics') were arranged in order to begin with the focus on lyricism while reserving the most harrowing coloratura requirements for later, after ample warm-up time. Between pairs of arias, we were treated to three string concerti, all of which highlighted Biondi's impeccable musicianship. It was particularly rewarding to hear Locatelli's Il pianto d'Arianna (the Concerto grosso in E-flat major). Throughout a highly unconventional amalgamation of short movements depicting the heroine's shifting moods, the lead violin (Biondi at his most intense) offered Ariadne's lament in broken strains of melody.

Over the last ten years, Vivica Genaux has found her niche in the Baroque repertoire. Although she sings music from a variety of genres, it is the florid, highly improvisatory music from the late 17th- and 18th-centuries that best matches her brilliant interpretive ability and astonishing vocal technique. She is utterly unique among operatic mezzo-sopranos in her ability to sing rapid divisions with pinpoint accuracy, while coloring words, adding ornaments, and drawing in the audience so that they can share the joy she seems to find in her art. To some, her peculiar method of articulating runs – lots of physical movement of her lips, chin, and throat combined with kaleidoscopic changes in vowel sounds – may be an acquired taste. But there can be no denying that it affords Genaux an unsurpassed ability to dazzle in music that surely was composed with precisely that aim in mind. She sets the gold standard in heroic feats of vocal daring, and it is fascinating to watch and hear.

Having thorough familiarity with her recordings – most specifically 'Pyrotechnics' and the earlier 'Arias for Farinelli' – I was anxious to see if Genaux could deliver the same accuracy in a live setting as she achieves in the studio. The first significant coloratura challenges on the program were found in the fourth aria, 'Alma oppressa' from La fida ninfa, and Genaux seemed to relish the chance to fly through the runs, all the while interacting demonstratively with the musicians surrounding her on the stage. Perhaps the single most virtuosic display of the evening was the penultimate selection - the almost inhumanly difficult 'Come in vano il mare irato' from Catone in Utica. In this typical 'revenge' aria, the character Emilia expresses her rage at Caesar with incredibly complicated runs, turns, and trills. This aria is the first and most impressive track on Genaux's 'Pyrotechnics' recording, and she absolutely nailed it in live performance to very nearly the same standard of perfection. If anyone has doubts about how far period performance practice has come in the last quarter-century, simply listen and compare Genaux and Biondi with Margherita Zimmermann under Claudio Scimone in a complete recording of the surviving manuscript of the opera from the early 80's. At the time the earlier recording was made, the latter pair were breaking new ground to be sure, but with the genius of Biondi and Genaux, the music is utterly transformed; its florid intricacy becomes text-driven and descriptive of Emilia's emotions, rather than merely a series of daunting vocal hurdles.

If coloratura fireworks were fully expected, I must say I was unprepared for Genaux's striking ability to delineate the specific setting and mood of each aria. Each of her characters was a unique creation, and through subtle vocal coloring she enhanced different emotions, thereby highlighting Vivaldi's skill at using key, melody, and tempo to bring his characters to life. Nowhere was this more impressive than in 'E prigionero e ré' from Semiramide. Genaux and Biondi collaborated to create an indelible portrait of the King Zoroastro as he meditates on being held prisoner and his impending execution. Genaux's spellbinding piano singing had the audience hanging on her every syllable, and Europa Galante played with such delicacy that it seemed you could hear each individual instrument.

After closing with a spectacular account of 'Agitata da due venti' from Griselda, the combined forces were generous enough to offer a pair of encores, both incorporated by Vivaldi in his pasticcio Bajazet, but written by other composers. The first, 'Sposa son disprezzata' by Geminiano Giacomelli, was notable for its understatement and intensity of emotion. The second was the incredible 'Qual guerriero in campo armato…' by Farinelli's brother Riccardo Broschi. Probably the single most difficult aria in the entire repertoire, it is astounding that Genaux summons the bravery to attempt it in live performance. Even more intriguing was the fact that she employed entirely different ornaments than she used in her two recordings of the aria. There truly aren't words to describe the exquisite joy of hearing such tremendous mastery of technique and style. It was a fittingly over-the-top finish to a spectacular evening, and left me hoping that Biondi and Genaux will come back to New York again very soon.