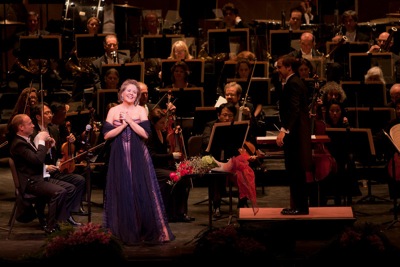 The global economic climate has been chilly for enough years now that the persistent financial struggle for arts organizations is no longer big news. Regional opera companies and symphony orchestras have folded all across the United States, with even long-established organizations continuing to face hard choices in order to survive (see most recently, the well publicized and depressing travails of the New York City Opera). There are, however, a few bright lights that continue to shine with optimism – among them, the San Diego Opera (SDO). For well over half a century, this highly respected organization has been offering prudently programmed seasons comprised primarily of operas from the standard repertoire, but with a generous sprinkling of more unusual titles. As a bonus, singers seem to enjoy working in this beautiful city, meaning top-notch casting and a chance for the local audience to experience world-class opera in a more intimate, homey environment. One of the most obvious strengths of the SDO organization is the way they nurture an atmosphere that combines artistic excellence with a down-to-earth, provincial sensibility. As a result, attending the opera in San Diego is a pleasure, and over the years, they have built a fervently loyal audience of local music lovers.

Therefore, it shouldn't come as much of a surprise that the SDO scored something of a coup in securing Renée Fleming for a gala benefit concert during their 2012 season. Designed as a fundraiser for the company, the concert was made possible through the generous sponsorship of local philanthropists Conrad Prebys and Debbie Turner. When the general and artistic director Ian D. Campbell acknowledged their financial gift during the concert festivities, the long, enthusiastic applause from the capacity audience amply displayed both gratitude and solidarity in the belief in the artistic and cultural value of the organization. It was a fine moment of sharing for a community committed to working together toward maintaining the health of their beloved opera company.

With Renée Fleming as the featured star, the San Diego Civic Opera House seemed nearly sold-out on the day of the concert (March 24, 2012), despite the steeply elevated ticket prices typical of such fundraising efforts. From a purely financial standpoint therefore, the concert must have delighted the administration. As an artistic event however, the concert was a mixed success. Fleming and the conductor Sebastian Lang-Lessing offered a hodgepodge of overtures, opera arias, popular songs, and selections from musical theater in a program designed to show off the soprano's well-known versatility without unduly taxing her vocal resources. While I admit to being less than excited by some of Fleming's excursions beyond the 'classical' realm, the audience enjoyed every second of the concert and roared their approval at every opportunity.

Playing more than a merely supporting role, the San Diego Symphony sounded absolutely fantastic, especially at the outset, with a spirited overture to Verdi's opera I vespri siciliani and then again after intermission with a thrilling account of the overture to Bernstein's Candide. Lang-Lessing gets highest marks for programming the less known Verdi piece in preference to his overplayed overture from La forza del destino – a staple of similar gala events. He was practically levitating above the podium during the infectious Candide overture – a real workout for the instrumentalists that they clearly relished. In fact, the orchestra played so well that an awkwardly arranged medley of themes from William's music for the movie Star Wars Episode V: The Empire Strikes Back made a rather exciting effect despite its anachronistic, 'Classical Pops' flavor. 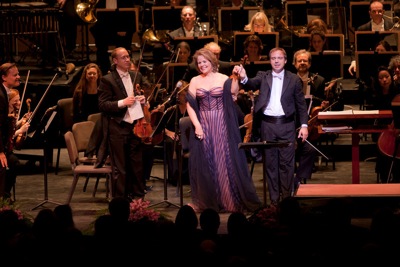 As the special guest, Fleming was in excellent, if slightly tentative voice, and began with four short, under-sung arias from the Puccini and Leoncavallo versions of La bohème. It seemed like a good idea to contrast the musical styles of these two very different verismo-era composers. However, Fleming's natural temperament has never been a particularly good fit for Puccini (Mimi's two arias), despite her emotional warmth and solid technique. Leoncavallo's arias for Mimi and Musetta (from the same libretto) are much less known for good reason: they don't come close to Puccini's level in either emotionalism or musical inspiration. After the aforementioned Star Wars interlude, Fleming returned with three excerpts from her recent album of popular music culled from various Indie rock hits, Dark Hope. I don't think the audience quite knew what to make of these selections with their cheesy orchestrations and Fleming's unorthodox vocal approach. It did strike me that 'Endlessly' by the group Muse could be transformed into a fine disco anthem – especially if Fleming could be convinced to present it with a more overtly flamboyant style.

The entire second half of the program was devoted to selections from musical theater. Fleming sang eight excerpts with widely variant vocal requirements and once again showed that she has no fear of taking risks. Both 'Loving You' from Sondheim's Passion and 'Moonfall' from Holmes' The Mystery of Edwin Drood have tessituras too low for Fleming's soaring soprano and fell somewhat flat for want of a more sensual, mezzo-soprano quality in the voice. On the other end of the emotional spectrum, Bernstein's 'I Feel Pretty' from West Side Story and Lerner and Loewe's 'Show Me' from My Fair Lady wanted more ebullience and sharpness of both rhythm and diction.

Much more successful – intensely moving, in fact – were songs written for more mature characters, where the sophistication of words and music perfectly suited Fleming's patrician style. Looking perhaps more gorgeous than ever, Fleming is now 53 and has had plenty of life experience with which to make 'Hello, Young Lovers' from Rodgers and Hammerstein's The King and I much more than a simple song. I saw many in the audience with tears, indicating a true connection between singer and listener. Even more profound, was 'You'll Never Walk Alone' from Carousel, a piece Fleming also sang at a memorial service at Ground Zero in New York City. As her final number on the printed program, she gave the audience a powerful emotional send-off, and elicited long, heartfelt applause. Three encores – Gershwin's 'Summertime', Puccini's 'O mio babbino caro', and Bernstein's 'Somewhere' – drove the audience to greater heights of frenzy, bringing the gala evening to an affecting close. 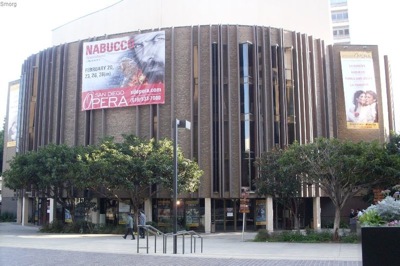 Hopefully, the gala fundraiser made a strong contribution to the future financial health of this fine company. In order to continue to entice as diverse an audience as possible, the administration has made cuts to the ticket pricing for their 2013 season, so opera fans from all over the world should feel encouraged to attend. San Diego is a beautiful destination, and the season for next year looks promising. The opening production will be Donizetti's La Fille du Regiment (thankfully in the original French language), starring Slovak coloratura soprano L'úbica Vargicová and tenor Stephen Costello who will sing Marie and Tonio, respectively. The inside buzz about this production may well end up concerning the non-leading roles however, with the two outstanding veterans Ewa Podles as the Marquise de Birkenfeld and Carol Vaness making a cameo as the Duchess of Krakenthorp. Conducting duties fall to the superb Frenchman Yves Abel.

The next production will be Saint-Saëns' Samson et Dalila, starring Clifton Forbis and Nadia Krasteva in the title roles, and including Tómas Tómasson and Gregory Reinhart, and conducted by Karen Keltner. Next up will be a true rarity: the first United States staging of Ildebrando Pizzetti's 1958 opera Murder in the Cathedral, conducted by Donato Renzetti. Iconic bass Ferruccio Furlanetto sings the lead role of Thomas Becket, and the remaining cast includes Allan Glassman, Susan Neves, and Helene Schneiderman. Finally, SDO will also stage Verdi's grand opera Aida, beginning on April 20. Daniele Callegari will conduct recent Metropolitan Opera sensation Latonia Moore in the title role and Jill Grove as her nemesis, Amneris. Tenor Walter Fraccaro and baritone Mark S. Doss fill out the remaining central roles. All of this information can be found, along with dates and production details, at SDO's website: www.sdopera.com. If you look closely, you will also see tentative plans for additional future seasons. Most excitingly, the SDO will host the outstanding combination of tenor Piotr Beczala and soprano Krassimira Stoyanova in both Verdi's Un ballo in maschera and his Requiem Mass. Both of these latter events are currently scheduled for the 2014 season. Book your travel plans now!