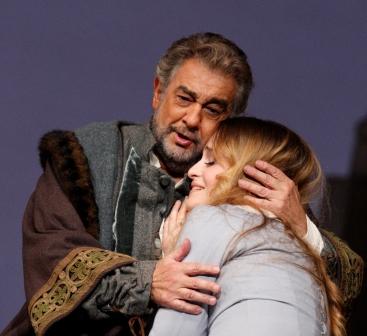 Plácido Domingo's now famous Simon Boccanegra arrived to London's Royal Opera House only a few weeks ago. The cast involved in this Covent Garden revival of Elijah Moshinsky's production came to the Royal Albert Hall for the 2010 Proms, offering a semi-staged performance, with costumes by Peter J Hall. It was a special event: the audience did not let the occasion pass without showing their appreciation of the Covent Garden team's work, and this Boccanegra was truly enjoyable, representing an artistic accomplishment on many levels.

The first round of applause goes to Antonio Pappano and chorus director Renato Balsadonna, together with the orchestra and chorus of the Royal Opera. Pappano's conducting was careful and delicate, yet always intense. I particularly appreciated the depth of colour that he and his musicians managed to create, even surpassing at times the Covent Garden performance. The orchestra was able to confer many subtle layers to the narrative scenes – in particular during the prologue, and again throughout Boccanegra's telling of the story of Maria's stolen daughter Fiesco.

There was another detail that Pappano emphasised and that lent the performance its special aura: the poignant use of pauses. One moment in which this crucial detail was perhaps most evident was during the Council Chamber scene: Boccanegra's curse on Amelia's kidnapper was made even more sinister thanks to the elegantly spaced phrasing and carefully exploited silences. The balance between the various components – the soloists, the orchestra, and the chorus – was astounding. As for Balsadonna's musicians, the diction of the singers was impeccable, and every nuance of the text was exploited. In some instances, the chorus was intensely moving, such as the women's mourning for Maria's death and with the men's crescendo and rallentando at the 'Miserere.'

Domingo's Boccanegra is a character that has made operatic history. While not making any attempt to sound like a baritone, the singer possesses an immensely expressive vocal colour. He intelligently exploits the strengths of his instrument, and the result is a compelling figure, both psychologically and vocally. The arch of his phrases tended to be brief, but he rarely seemed short of breath. And in powerful emotional moments, such as the recognition scene, his lines were beautifully delivered.

Domingo's interaction with the rest of the singers was impressive too. For me, one of the highlights, and the climax of this performance, was Boccanegra's final duet with Fiesco. The tenderness of the reconciliation between the two men, mixed with the bitterness of Boccanegra's deathly fate, was brought to life by the singers' vocal and dramatic interpretation. In his portrayal, Ferruccio Furlanetto gave life to the many bitter sides of Fiesco's character, who is at once a prominent public figure in Genoa, Boccanegra's political enemy, and the father of the doge's late lover. Furlanetto has lost some of the vocal colour that made him one of the most acclaimed basses, but his artistry still comes across powerfully.

Jonathan Summers created a proud Paolo but he was never incisive. Joseph Calleja's Adorno was a vehement, impulsive and warm character – features that are perfectly suited to the young man depicted in Verdi's opera. I found Calleja's timbre sharp, especially in the changes of intensity from piano to forte, and at times unsophisticated. Yet, his solo scene in Act II was a tremendous display of potential, which brought him loud cheers from the promenaders.

I felt less comfortable with Marina Poplavskaya's Amelia. To her credit, she showed great control of her voice, her pianissimos were beautifully delivered and some of the details of her character were very well portrayed—such as her hesitation before Boccanegra's questioning during the recognition scene. However, a lack of Italianate sound and the perceptible strain at the top register of her voice made her interpretation less convincing that those of her colleagues.

Some of the (very few) instances that marred the performance were the same ones that I noticed at Covent Garden. Certain entrances were again staged anti-climatically, such as the sudden reappearance of Amelia during the Council Chamber scene: she stood still in front of all the characters on stage for a moment too long, weakening the astonishment of the crowd on stage.

This was overall an elegant Boccanegra: despite the reduced space, the interaction between the characters and the use of props were aptly played out, and the level of artistry displayed on stage was high.

2010 Proms: The opening night
2010 Proms: The Mastersingers with Terfel and the WNO
Concert review: Boccanegra (1857 version) with the Chelsea Opera Group