Live Telecast from the Metropolitan Opera 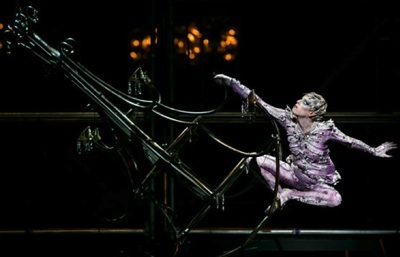 In a 1963 episode of the expressionist television series The Twilight Zone, a desperate screenwriter uses black magic to summon Shakespeare to the present.  The Met's new production of Thomas Adès's The Tempest, broadcast live from Lincoln Center last Saturday, brings the Bard and expressionism together once again — only the "dark arts" here come not from the chain-smoking Rod Serling, but from the fertile imaginations of the composer and Robert Lepage.

In The Tempest, Lepage — the controversial director and scenic imagist whose 45-ton set monstrosity in the Met's Ring Cycle last season deserved a Twilight Zone episode all its own — spins a handsomely crafted and visually stimulating supernatural fantasy combining magical spells, monsters, spirits and surrealism that would have made Serling envious.  Add to this Adès's dark and brooding (and brilliantly orchestrated) score and you've got a riveting piece of theater that engages the eyes and ears with great intensity.

Adès was in his early 30s in 2004 when his opera premiered at London's Royal Opera House (Covent Garden).  After several revivals (including the American premiere at Sante Fe Opera in 2006) The Tempest made its way to the Met in this Lepage version, a co-production of the L'Opéra de Québec and Wiener Staatsoper.

It's not easy to make sweeping generalizations about Adès's musical style in this opera.  The continuous music and strongly independent orchestral writing give The Tempest the look and feel of a "music drama," as championed by Wagner.  But the work's busy and thickly orchestrated writing, particularly its angry and abrupt staccato outbursts in the brass section, pays homage to Alban Berg's expressionist masterpiece, Wozzeck.  Unlike Berg, however, Adès — in spite of some harshly dissonant sections — never quite abandons tonality in The Tempest.

Beyond the brassy moments of anger (often associated with the courtiers of the Milanese Court) are sections of serene musical delight that suggest the innocence and unspoiled beauty of the island and its surroundings.  Included here is the love duet between Miranda and Ferdinand where the writing for winds and strings is especially lovely, as the pair walks off into David Leclerc's inviting video image of rippling sea waters.  Still, such moments of aural relief are all too rare in the thickly textured scoring in this work — which like many music dramas drives the full sound of a large orchestra with relentless perseverance. 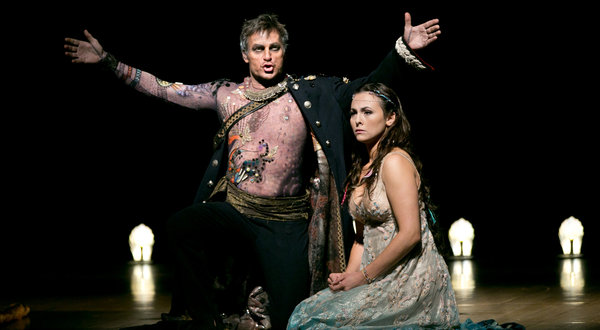 The storyline centers on Prospero (Simon Keenlyside), who has been deposed from his throne as Duke of Milan by his brother Antonio (Toby Spence) and the King of Naples (William Burden).  Prospero and his young daughter Miranda (Isabel Leonard) are then cast out to sea, where the pair eventually settles on a mysterious island.  Prospero quickly learns the art of sorcery, which among other things empowers him to manufacture a storm that later shipwrecks his helpless rivals onto the island.  Among the shipwrecked is the King's son, Ferdinand (Alek Shrader), who meets and falls in love with Miranda.  The couple's strong bond of innocence and righteousness eventually persuades Prospero to forgive his enemies.  He renounces his magical powers and returns to his rightful throne in Milan.

The role of Prospero calls for a high baritone, which is well suited to Simon Keenlyside's vocal strengths.  Keenlyside "owns" this role, having sung the part in the original 2004 Royal Opera House premiere and several times thereafter.

In his opening duet with Miranda detailing the pair's banishment from Milan, Keenlyside takes his cue from Adès's wide-intervals and choppy, disjointed phrases and forges a character whose irritable disposition and pent-up vengeance strikes terror in the heart of his terrified daughter.  Keenlyside plays his character stoically and enigmatically, so much so that I found it difficult to decide whether to fear or pity him.  I eventually opted for the latter.

Adès makes no excuses for his musical treatment of the high-flying Ariel, a bizarre part representing a male spirit played here in masterful fashion by coloratura soprano Audrey Luna.  Flying up and across the stage under TV Director Gary Halvorson's close-up camerawork, Luna's wide-eyes and large mouth evoke the image of Carol Burnett playing Peter Pan during one of her television skits.  (Credit Halvorson for not revealing the hidden wires that kept Luna airborne through much of the production.)

It's rare that coloratura sopranos are abused in such a manner as in the role of Ariel.  Mozart's Queen of the Night and Offenbach's Olympia require singers who can reach high Es and Fs effectively, but they are asked to do so only sparingly.  Adès writes a pernicious part that demands considerably more screeching than singing.  The one moment where Ariel sings in what might be considered a soprano's normal range comes during the line, "If I were human" — a clever touch, indeed.

When asked why he made such stratospheric demands on Ariel, Adès answered simply "because that's where he lives."  By this reasoning, the part of Mephistopheles — were Adès ever to write such a role — would require a sub-contra bass of extraordinary depth.  Let's hope that Luna has enough voice left to continue her career once this production runs its course.

Isabel Leonard captures a sense of innocence and beauty in her role as Miranda, and her exquisite voice brought some much needed contrast to the opera's other roles requiring exaggerations both of register and vocal timbre.  Curiously, the part of Miranda calls for a mezzo — but aside from the love duet with Ferdinand at the end of Act 2, Miranda sings in the higher (soprano) register. 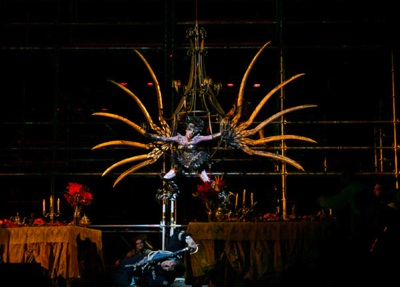 Those watching the opera in HD simulcast and close-up camerawork are likely to have noticed that Leonard's beauty reaches beyond just her voice.  Dressed in a low-cut gown (there's no dress code on this island), Leonard makes it abundantly clear to the listener why the monster Caliban is in a constant state of lust for the girl (Miranda is just under 15 years old in the Shakespeare original) and why the King of Naples' son Ferdinand falls in love with her at first sight.

As Ferdinand, Alek Shrader looked the part of the earnest and handsome suitor to Miranda and his command of the high register was as delicate and pure as his well intentioned character.  Adès keeps the part high, as if to project the full-strength virtue of the man worthy of marrying Prospero's daughter.  William Burden, as Ferdinand's father, also maintained a solid upper vocal register and was convincingly heartbroken when faced with the prospect of his son's apparent drowning during the shipwreck.

In both looks and voice, Alan Oke projected a magnificent image as the savage Caliban and delivered one of the most convincing vocal efforts of the production — spitting out Adès's jagged lines with all due vengeance as the rightful heir to the island before Prospero had arrived to enslave him.  Oke's character lusts for Miranda the way Monostatos salivates for Pamina in Die Zauberflöte, and is costumed like a grotesque Papageno in a blackbird outfit.

As Prospero's nefarious brother Antonio, Toby Spence (who played the role of Ferdinand in the original 2004 production) appeared less comfortable in the high register than the other male singers.

The incongruent pairing of voices in the roles of Trinculo and Stefano (Countertenor Iestyn Davies and bass-baritone Stefano Kevin Burdette, respectively) provided much of the comic relief in this production as the imbibing dynamic duo who, along with Caliban, aspire to usurp Prospero as ruler of the island.

I thought Lepage's setting of the three acts as different views from the La Scala Opera House in Milan — an obvious allusion to Prospero's nostalgic yearning for home — was a clever and welcome touch to the production's set design concept.  Act 1 takes place on the theater's stage looking out into the auditorium and iconic box seats; Act 2 takes place backstage, while the action in Act 3 unfolds on the floor of the auditorium with the characters facing the stage.

Diction throughout the production was a problem, as Meredith Oakes's rhymed couplets were all but impossible to decipher.  Adès's wide-intervalled, angular melodic lines that routinely dwell in the singers' high-registers keep intelligibility of diction within a very narrow range — from what I'd call "somewhat distinguishable" to WTF?

Adès led a well-prepared Met Orchestra that navigated the composer's busy and thickly textured musical score with no apparent signs of fatigue or loss of stamina.  This is demanding writing, particularly with respect to the brass writing (which is on par with many Strauss operas).  During intermission Adès hinted, ever so gently, that not all in the pit went as he had hoped.  But then, how many composers are totally satisfied with any public performance of their works?

Costume Designer Kym Barrett indulges Lepage's fairylike concept of his very own Fantasy Island, dressing the spirit Ariel in purple-colored tights with matching purple lipstick (creating a sort of birdlike "Papageno" image), and casting Caliban as an outlandish blackbird.  Why Barrett thought it necessary to carve so much body art onto Prospero's upper-torso with gothic tattoos is anybody's guess — although the intricate ink pattern invites an unintended pun when Caliban tells the sorcerer, "Your art makes me bow to you."  The quote may apply equally well to Messrs. Adès and Lepage.