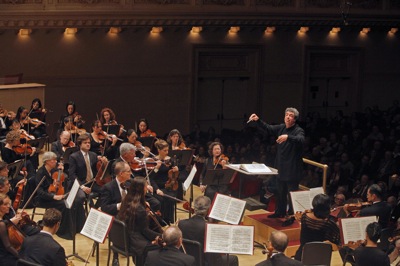 Richard Wagner, hiding out from the law (he had participated in a failed revolutionary coup) at the home of one of his benefactors, Otto Wesendonck, not only seduced the man's wife, the poetess Mathilde, but also romanced and eventually married his prominent house guest, Cosima von Buelow, wife of conductor Hans and daughter of Franz Liszt. The most intensely romantic music in all of opera was granted to the two heroines modeled after these two remarkable women (Isolde was inspired by Mathilde; Bruennhilde by Cosima). The closest music to the Metropolitan Opera Orchestra's acknowledged area of expertise on Sunday October 14 at Carnegie Hall included a rendition of the five Wesendonck Lieder performed by soprano Michelle DeYoung, substituting for Eva- Maria Westbroek, a recent Sieglinde in the Met's LePage production of the Ring, who was profiled in these pages while performing in San Francisco.

While DeYoung did a splendid job, the featured entity in these concerts is decidedly the orchestra, whose quality is impeccable but who is hidden under the bushel of the proscenium a few blocks uptown. In fact, the genesis of these concerts was to showcase this superb ensemble completely outside of the arena of the opera, but over time the marketing people, especially once the Gelb administration took over, began to add theatrical elements. No matter. The group responded very well and has demonstrated that they are not only adept at the pit work but the major symphonic repertoire as well.

There was definitely nothing wrong with the humidity level in DeYoung's treibhaus and she sung quite movingly as she plumbed some of these lower depths. Conductor Semyon Bychkov realized that her voice is large enough to sail over (or, in some of these notes, under) the full-throated instrumental experience. In terms of pure emotion, these songs are gritty, edgy, a little uncomfortable and literally spine-chilling. DeYoung certainly captured that spirit hauntingly.

Expanding on a melodic idea from his youthful Symphony in F Minor, Richard Strauss fashioned a total immersion into the world of program music with Eine Alpensinfonie, a brilliant showcase for the entire ensemble. With the possible exception of Bartok's Concerto for Orchestra, this work tests and displays the mettle of a symphonic unit to its logical extremes. The Met group was outstanding throughout and seldom have I heard the strings so vibrant and dug in so seriously. Of course, the piece is famous for its hornplay (there are no less than 20 horns required), but this particular rendition seemed to distinguish itself for lyrical string communication. One cavil (well, actually two): the offstage effects by cowbells and horns were not suitably otherworldly or exotic, but rather simply sounding as they would have done had there been room on the main stage and the final slide down was eliminated in favor of a dead stop between penultimate and ultimate notes. This did work well enough, but was a pale imitation of what is written in the score.