Brahms: Piano Concerto No. 1; Symphony No. 4 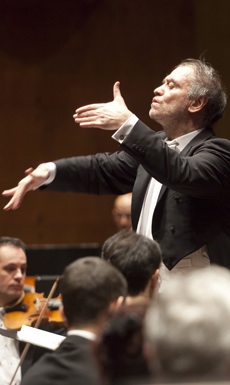 Extraordinary music was the feature of the two all-Brahms evenings by the London Symphony Orchestra at Avery Fisher Hall this week. I happened to be in London when the announcement came that Valery Gergiev would be named as the new music director and shared the view of several print watchdogs that the tight discipline of the ensemble would soon be gone with the wind. Some years later, what does the current evidence indicate? I stopped in for the second New York concert to hear for myself.

Ever since the Gould vs. Bernstein battle, it is necessary to think somewhat about the interpretation of the Piano Concerto No. 1. Much as I loved Glenn I was partial to Lenny as well (a common reaction which made their very public disagreement so thorny for New York music lovers) and never cared for the “Baroque” argument that all three movements should be played at basically the same tempo. Yet this now somewhat anachronistic theory popped up again when Maestro Gergiev and soloist Denis Matsuev appeared to agree on one rather jaunty speed for the entire work. Mr. Matsuev is a very large gentleman and is known in his publicity rounds as “the Siberian Bear”. As expected, he played quite stronghandedly (as we are told did Brahms himself).

It is important to state early that Mr. Matsuev delivered a virtually note perfect performance, no small task with a bid-boned Brahms concerto. Within the confines of his chosen speed, he was balanced, centered and extremely confident. However, there appeared to be little feeling in his digits, the Adagio “portrait of Clara” presented in a lapidary but ultimately dispassionate manner. Had this been a student performance, it would have been appropriate to state: “Bravo! Now that we have all of the notes, let’s proceed to extract the music.”

As for the ensemble, it took very little time to hear that something was not quite in sync. Inner voices were often out of tune or a bit late (the odd tempi may have thrown some of the veterans), entrances were sometimes shrill, the horns – poor blighters – had a simply awful night, able to enunciate the solos satisfactorily but wandering aimlessly through their harmonic underpinnings. Gergiev simply followed along, not imposing much of his will nor toiling to right the ship when appropriate.

Was it jet lag? It could have been, but sounded simply like a lack of precision rehearsal. We all came back from the unseasonably beautiful evening and settled in for what would certainly be a superb Symphony No 4. What followed was what one of my favorite New York critics calls a “nothingburger” – not good, not bad and certainly not interesting. This performance seemed adrift most of the time, with only the Allegro giocoso in fine fettle. However, attempting to put his stamp on the piece, Gergiev allowed no pause between the third and fourth movements. Perhaps this is a valid approach, but it appeared that he had neglected to tell the troops, most of whom came in at least a half of a beat late. Even the least sophisticated among us must have noticed this clunky moment.

Those of us old enough to remember hearing Otto Klemperer used to love the uncertainty before a concert. But old Otto had deep-seeded manic depression and therefore an excuse (but, oh boy, when he was on!). Valery Gergiev does indeed create frisson with his reputation for inconsistency and surprise. These are great qualities in a guest conductor, but in a music director?