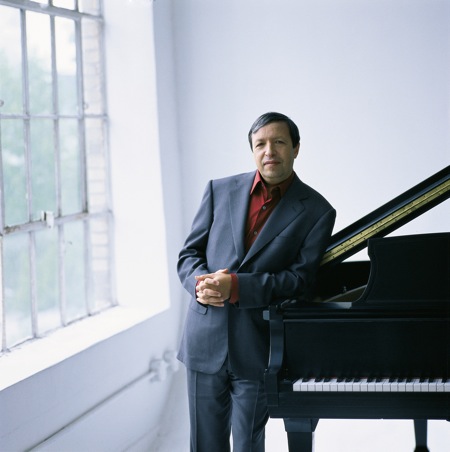 After witnessing the University of Michigan's 12-9 football victory over longtime rival Michigan State University on Saturday, Ann Arborites had a reason to celebrate. While sports fans crowded into local bars, another set of fans made their way to Hill Auditorium to cheer on the musical athletics of MVP ("Most Valuable Pianist") Murray Perahia.

Over the course of his career, 65-year-old Perahia has made a name for himself as one of the foremost interpreters of traditional piano repertoire. It's no surprise, then, that his recital on Saturday — which marked his twelfth Ann Arbor appearance — featured "old favorites" from Haydn, Schubert, Beethoven, Schumann, and Chopin.

It would be unfair to call the program "tame," but there is no denying that Perahia is a conservative when it comes to repertoire. The pianist is renowned for his interpretations of familiar Classical and Romantic composers, and audiences expect him to play the works they know and love.

The first half began with Haydn's little-performed 1773 Sonata in D Major, one of the six "Esterházy Sonatas." Perahia brought out the proto-Romantic qualities of the work with subtle hints of rubato in the first movement's B section. Proponents of historically faithful performance would likely have found fault in Perahia's heavy sforzandi in a piece that was originally composed for harpsichord.

In the second movement, Perahia managed to bring emotional depth to the seemingly simple Adagio. His hands were visibly shaking as he worked to blend mystery and delicacy in the minor-key theme. He also created a breathtaking effect by extending the silence after cadences for a heart-beat longer than Haydn wrote.

Next came a frustrating performance of Schubert's six Moments musicaux, composed between 1823 and 1828. The delicacy we heard in the second movement of the Haydn totally disappeared. Instead, Perahia hammered out a tense Sturm und Drang interpretation of Schubert's character pieces. The problem can be largely attributed to Perahia's touch; he pressed too far into the keys, creating a clenched sound rather than allowing the melodies to sing. His heavy touch also interfered with technique — many passages sounded muddy, and repeated pitches became swallowed up, particularly in the first and third movements.

Especially unappealing was a moment in the second part, when he violently launched into the repetition of the B section. Though the score is marked forte, Perahia pounded on the chord, and even emitted an uncharacteristic grunt. The Moments musicaux can border on melancholic, they are by no means the angst-filled pieces that Perahia made them out to be.

Unfortunately, this tense playing continued into the first two movements of Beethoven's 1801 Sonata no. 14 in C-sharp minor. Avoiding any overly-Romantic schmaltziness, Perahia offered up a fairly rigid rendition of the famous "Moonlight" theme. The short second movement also lacked its usual playfulness, probably because the pianist left few breaks in the melody line.

Yet Perahia earned forgiveness with his thrilling performance of the virtuosic third movement. The frustrated quality gave way to a more flexible playing, including greater variation of dynamics and tempos. Runs were executed perfectly, even at a breakneck speed. While some audience members complained about his heavy left hand, it effectively drove the movement forward and brought to mind the pounding bass line of contemporary pop music.

It became clear that the finale of the Beethoven was meant to serve as a kind of climax for the recital — all of the earlier tension and anxiety built up to the explosive Presto agitato. Yet Perahia might have found another method to achieve this. Though injecting drama and theatricality into the program is an innovative concept, it should never interfere with musicality, as it did in the Schubert.

The second half was much more enjoyable, with Perahia turning to faster works that showed off his virtuosity. Schumann's 1839 Carnival Scenes from Vienna was a much-needed relief after the gloom of the first half. In the first movement, Perahia moved breathlessly from one theme to the next, imitating the whirlwind excitement of a carnival. Yet there were also some particularly poignant passages, notably the second episode, which Perahia played with expressivity that even leaned toward impressionism.

The middle three movements Perahia combined into a single quasai-fantasy. In the second-movement Romanze, we finally heard the melody "sing," and the third-movement Scherzino brought out the bouncy playfulness that was missing in the second movement of the Beethoven.

Perahia approached Chopin's 1839 Impromptu no. 2 in F-sharp Major with the same spontaneity of the Carnival Scenes. The thirty-second note figures in the right hand were spun out effortlessly, and didn't interfere with the left hand melody — Perahia knows clear melody line is more important than showing off. The other Chopin gem, the 1831 Scherzo no. 1 in B minor, was a satisfying final piece. Perahia focused on attack — many of his melismas began with a bang. Others were gentler and ended with a whisper. One complaint was that his thumb was much too heavy in the B section, where it played the melody.

The encores included Brahms Intermezzo in C major and Schubert's Impromptu in E-flat Major. Both felt a little superfluous, especially since we had just heard two stylistically similar works by Chopin. Instead of ending with more sparkling showpieces, Perahia might have ended with a poignant piece to close the ending, such as Schumann's "Träumerei." But perhaps, considering the Wolverine's victory, these energetic encore numbers were better-suited to the Ann Arbor audience's mood.