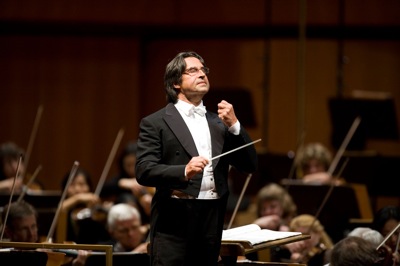 In May 1913, the Chicago Symphony Orchestra became the first ensemble to play in Ann Arbor's newly constructed Hill Auditorium. In honor of the concert hall's centennial season, the University Musical Society — Ann Arbor's premiere arts presenter — invited the CSO back to Hill to perform on Thursday. For the orchestra's 204th UMS appearance, music director Riccardo Muti led the CSO in works by Richard Wagner, Mason Bates, and César Franck.

First on the program was Wagner's overture to Der Fliegende Holländer, composed in 1843. Wagner, hoping to break away from the "best hits" model of the overture, wove together leitmotifs in the prelude to create an orchestral retelling of the opera's plot. For the most part, the CSO did an excellent job of handling this musical storytelling. The first statement of Senta's ballad moved organically through the woodwinds, with every soloist seamlessly picking up where another left off. The timpanist perfectly captured the image of the Dutchman's ship emerging from the distant fog. And the basses conjured the swelling of waves during an ocean storm.

Yet Muti got too caught up in the storm theme. At times, snippets of leitmotifs played by the winds were swallowed up in the "swelling sea" of strings. While bombastic force is expected from a Wagner piece, Muti could have backed off at several points.

There were a few other minor complaints: the sailor's chorus "Steuermann! Laß die Wacht!" was too stately, the violins became a bit muddy when they dropped low in their range, and the syncopation in the cellos and basses at the climax of Senta's ballad didn't line up exactly with melody. But overall, it was a thrilling performance and an ideal opening number.

Next came an electroacoustic piece by the young American composer Mason Bates. At only thirty-five, Bates has already won widespread recognition, especially after the 2011 YouTube Symphony Orchestra broadcast his work Mohthership across the globe. Bates' work as a club DJ has had a significant influence on his style, which combines elements of popular electronica with traditional American "classicism."

Bates' Alternative Energy, which the CSO premiered in February, was the highlight of the evening. A kind of environmentalist Symphonie Fantastique, the work employs an idée fixe to tell the story of an industrialist past, a sleek technological present, and a terrifying atomic future. The first movement, titled "Ford's Farm, 1896—," opened with the idée fixe in the solo violin. The melody, played dexterously by concertmaster Robert Chen, called to mind the quintessential "American sound" of Copland and Barber. Following this theme, a whirring crank started up a snare beat reminiscent of a car putting along. A little research revealed that the year 1896 of the movement's title marks the year Henry Ford invented his first motorized car, the Ford Quadricycle.

Movement two, "Chicago 2012—," transported us 116 years into the future – and into our present. The orchestra was instantly silenced by the deafening roar of a particle accelerator, recorded at the Fermi National Accelerator Laboratory outside of Chicago. By setting up four separate speakers behind the orchestra, Bates was able to use spatial sound to depict charged particles whizzing past at nearly the speed of light. This led to a pattern of electronic buzzes, puffs, blats, and clicks. The orchestra joined in with its own "noises," creating a pointillistic, mechanical sound. Muti should be commended for flawlessly synchronizing the electronic with the acoustic in this section.

Moving another century into the future, the third movement, titled "Xinjiang Province, 2112—," began with a hazy impressionistic introduction. Out of shifting timbres arose an ascending pentatonic scale in the bells and a quasi-Chinese flute melody. This theme, meant to evoke China's natural world, had a whiff of Orientalism. Bates might have found a better way to suggest Chinese culture without resorting to musical stereotypes.

The second half of the movement began with the low, rumbling sound of a nuclear power plant, giving way to the industrialist violin motif. Bates saved his best music for this moment. Falling back on his electronica roots, the composer incorporated the heavy bass and driving rhythms of techno and hip-hop. The result, a kind of dubstep Rite of Spring, was electrifying. In the way that Gershwin wedded jazz to classical forms, Bates has found a way to incorporate today's popular music into orchestral music.

The fourth and final movement, "Reykjavik, 2222," was somewhat less effective that the previous ones. The premise — human beings living in in "an Icelandic rain forest on a hotter planet" — pushed the environmentalist theme toward hokey sci-fi tropes. Clangy, pot-like percussion sounds and "primitive" drums were mixed with recordings of jungle sounds and the impressionistic nature music of the second movement. Every so often, the idée fixe would return, calling to mind the harmful industrialist past. The irony in this, however, was that the "evil" music of industry was the catchiest. By ending with an ambient and rather static depiction of nature, Bates threw off the momentum of the earlier movements, ending the piece with preachy finger-wagging instead of a bang. Considering the power and energy of his style, a catastrophic "Twilight of the Gods" ending for mankind would perhaps have been more appropriate for this particular member of the audience.

The second half of the concert offered a slow-paced performance of Franck's Symphony in D minor. Muti was obsessive in the way he laid out themes, especially in the first movement. Though he was likely going for expansiveness, he caused the piece to drag. Instead of a sensual masterpiece of French Romanticism, the work came across like a newly discovered Brahms symphony. However, there were some glorious moments especially for English horn player Scott Hostetler, who offered a stylish interpretation of the well-known second movement solo.

The orchestra followed up the program with not one, but two encore performances of the University of Michigan's fight song, "The Victors." Naturally, the Ann Arbor Audience went wild! Muti and the CSO will travel to New York next week to perform the same, inspiring program at Carnegie Hall (though likely without the Michigan encore).