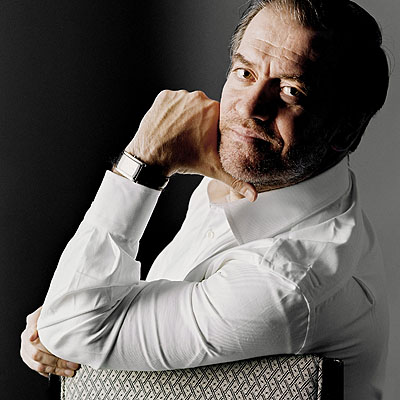 Exactly two years ago this month, Maestro Valery Gergiev introduced Ann Arbor to his compatriot and protégé, the young pianist Denis Matsuev. The pianist's performance of Rachmaninov's Third Concerto with the Mariinsky Orchestra so impressed Ann Arbor that he was invited to return for a solo recital the following season. On Saturday, Matsuev — joined again by Gergiev and the Mariinsky — made his third appearance at Hill Auditorium. Obviously, Ann Arbor audiences can't get enough of him.

Rather than introducing his star early in the program, Gergiev began with Strauss' Ein Heldenleben for the first half of the concert. From the very opening bars, it became clear that the evening held a lot in store. The introduction of the "Hero" was powerful and luscious, with Gergiev unabashedly allowing Strauss' late-Romantic melodies soar. For the hero's adversaries, on the other hand, the conductor slowed the tempo considerably, emphasizing the delightfully grotesque squeaks and squawks in the woodwinds.

"The Hero's Companion" showed off concertmaster Roman Simovich in an extended violin cadenza. Simovich portrayed the hero's lady-love with a full-bodied and sensual color. His trills were especially well-shaped, yet he did have a slight problem with high pitches, which often came out flat. Though this was barely noticeable.

Gergiev's interpretation of the "The Hero's Works of Battle" was distinctly Russian — he stressed the snare, trumpets, and cymbals, calling to mind one of Shostakovich's Soviet marches. While this movement can easily become chaotic with themes and motifs overlapping one another in a very Stravinskyan manner, Gergiev did a fine job of keeping musical material organized down to the smallest pizzicato.

In the final movement, depicting the Hero's retirement, we finally got a chance to hear some gorgeous lyrical playing from the wind section — the oboes and English horns, in particular, were in top form. While the movement did seem to drag at the end, this may be more Strauss' fault than Gergiev's. Though one does wonder whether Gergiev could have found a way to keep the final few minutes of the piece from dragging.

Following intermission, the Mariinsky string section was joined onstage by Matsuev and trumpeter Timur Marynov for Shostakovich's Piano Concerto no. 1. It is no surprise that Matsuev is nicknamed the "Siberian Bear" — the thirty-seven-year-old composer has an impressive stature that matches his muscular keyboard work. In the first movement, he was not afraid to use the piano as a percussion instrument, hammering out Shostakovich's manic rhythms.

Marynov, on the other hand, was lacking in style. In the second movement, he failed to take advantage of the muted solo; instead of the jazzy sound that Shostakovich wanted, he merely sounded muffled. In the final movement, he didn't quite pick up on the humor in the mock-stately march. Overall, he seemed more like an afterthought than the comedic partner he was supposed to be for Matsuev.

But Matsuev more than made up for Marynov's disappointing performance. His playing in the final movement was filled with energy and wit. His physical presence onstage is a sight to see: like a rock star, he bobs his head to his own solos and taps on the piano bench during orchestral sections. His final cadenza even had the spontaneity of a jam session. But that is not to say that Matsuev is a casual performer — every moment is perfectly "choreographed," and he is totally invested in the music. It is no wonder why Ann Arbor continues to invite him back.

The final piece of the evening was that mammoth of 20th-century repertoire: Stravinsky's The Rite of Spring. In the program notes was printed the warning, "If you turn your back on it, it will bite you," specifically referring to Gergiev's interpretation of the work. Indeed, while many conductors have attempted uncover some sort of latent Romanticism in the work, the Mariinsky's rendition was strange and unsettling, as Stravinsky likely intended.

Gergiev, likewise, tended to de-emphasize Stravinsky's folk tunes; melodies became just as important or took a back seat to the "noises" of the work. During the "Dances of the Young Girls," for instance, a loud triangle part nearly covered up the scurrying main theme, and the grating guiro part in the "Procession of the Sage" was especially noticeable. Near the end of the "Kiss of the Earth," Gergiev basked in Stravinsky's otherworldly dissonances, calling to mind Penderecki's Threnody to the Victims of Hiroshima. By emphasizing the modernist elements in the Rite, Gergiev was able to make the work sound new and fresh, despite the fact that it was composed 99 years ago.

However, Gergiev must have been aware of the extremes to which he pushed Stravinsky's score and the effect it had on the audience. He immediately followed the last violent chord of the work with a lighthearted encore, the polonaise from Tchaikovsky's Eugene Onegin. While Gergiev was able to satisfy more experienced listeners with a forward-thinking Rite, he also made sure to appease more conservative audience members.

The Mariinsky's visit was, without out a doubt, the highlight of Ann Arbor's concert season thus far. It will be difficult for other orchestras to top Saturday's concert, especially considering Matsuev's performance. One can only hope that as the young pianist advances in his career, he won't forget the small Michigan town that appreciates him so much.