Beethoven: Egmont Overture; Symphonies No. 5 and No. 7 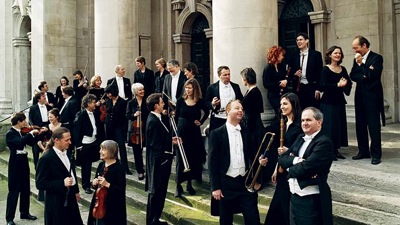 In the 1930's Anton Webern was engaged to conduct a concert in Barcelona the program of which included the Symphony No. 5 of Beethoven. He had three days to prepare the orchestra. At the end of the second day a reporter for a local journal asked him how the rehearsals were progressing. "Good", the maestro asserted, "we have the da, da, da…DUH almost to where I want it!" The eminent Austrian musicologist was fired the following morning but I'm sure that his proposed concert was not as extensive as the premiere of the piece under the baton of the composer. That enchanted evening the Fifth and Sixth were premiered on the same program (with the numbers reversed) and this was but a portion of the bill of fare. In all of music there is no more famous passage than this opening phrase and its pronouncement heralds an experience as exultant and emotionally draining as any in Western art.

Now at the height of his powers and furious at the onset of his deafness, Beethoven is strong enough to write passages that seem to be mistakes in order to resolve them in glorious fashion at the victorious conclusion of this seminal work. One such famous phrase is played by the horns near the beginning of the finale, a dropping down of tone so striking that it disturbingly displeases the ear and leaves an unsettled feel in the listener. Its eventual "correction" leaves the hearer feeling whole again (Wagner, one of the most ardent students of Beethoven's life and craft, stretches this technique to its limit in Tristan). Orchestral musicians to a man tell me how exciting it is to play this symphony and I am always thrilled to hear its many inner voices exposed in a good live reading.

The level of assiduity and dedication of Webern is matched in the modern era by the more serious members of the period performance practice group, whose leading exponent, Sir John Eliot Gardiner, brought his Orchestre Révolutionnaire et Romantique to Carnegie Hall for what can only be described as one of the most thought-provoking evenings of music in recent memory.

The ensemble is about half the size of a modern symphonic entity and employs only instruments alive and kicking at the turn of the nineteenth century. The long bore trumpets, natural horns with changeable crooks, double contra bassoons and hard stick timpani lend an atavistic tone to the blend, sometimes seeming more in keeping with a twentieth century sonority, say that of Le sacre du Printemps. Vibrato is minimized under Mr. Gardiner, although not verboten as in the efforts of the more ascetic Roger Norrington. What truly jars the ear are the tempi.

For the opening Allegro con brio of the Fifith, Mr. Gardiner chose a speed where mere mortals are simply not able to enunciate clearly in any of the sustained eighth note passages, so that his otherwise highly precise troops were forced into a muddy performance only suggesting note to note transitions and haunted throughout by overtonal creep. The music is, of course, familiar to all and the net result of the madcap alacrity was one of edgy parody. Even though the individual players did their best, the presence of Professor Peter Schickele gliding by on roller skates would not have been completely out of place.

The Andante con moto was the one movement of the entire evening where the tempo could be considered "modern", although a bit on the brisk side. In this Through the Looking Glass performance, old is new and new is old and the presence of Beethoven is elusive but constant. Many of the musicians in this ensemble are quite young and so did not grow up in the thrall of a Furtwaengler, Walter or Klemperer performance, but those of us who did could only sit there in wonderment. This is very interesting music, but is it Beethoven?

The period folks have painstakingly constructed their arguments and in most cases they make some sense, although much of their foundation is built on conjectural quicksand. One question that comes to mind is what would Beethoven have thought of a full orchestral performance from the golden era of the twentieth century. Many musicologists and even popularizers of Beethoven's music share the conception that the quality of musicians in his day was far the inferior of our contemporaries. Perhaps. But if true, would not the composer at least secretly have craved a higher level of diligence? One thing is certain: he would not have been any more conflicted that the rest of us.

There was much to praise in this concert. The Egmont was exciting, the Seventh well executed. However, the tempo of the famous Allegretto was simply silly, as if conductor and crew were simply trying to get though it as harmlessly as possible. Where was the outcry, the passion, the humanity? Incidentally, the crowd reaction was somewhat tepid, very unusual for a program of such normally beloved pieces.

All of this controversy speaks to the timelessness of Beethoven. In another hundred years, his music will probably be performed in an entirely new way. But the main point to remember is that it will always be performed.