A cappella religious music by Byrd, Palestrina, and Lassus; pop and folk songs 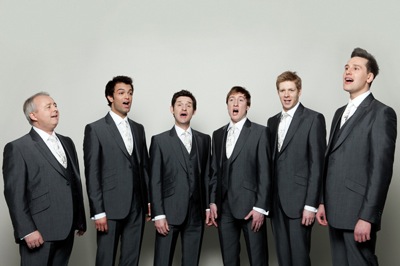 While many young University of Michigan couples spent their Valentine's evening on dinner dates, nearly one thousand Ann Arborites found themselves at a rather unexpected venue on such an amorous holiday — a church sanctuary. Perhaps returning to the holy origins of Saint Valentine's Day, the beloved King's Singers presented a program of a cappella religious music at Ann Arbor's Saint Francis of Assisi Church on Thursday.

Founded in 1968 at King's College, Cambridge, the King's Singers are a six-man choral group consisting of two countertenors, a tenor, two baritones, and a bass. None of the original six members remain in the ensemble, and the group has cycled through nearly 30 different singers during its 45 years of existence. At present, the sextet is comprised of first countertenor David Hurley, second countertenor Timothy Wayne-Wright, tenor Paul Phoenix, first baritone Christopher Bruerton, second baritone Christopher Gabbitas, and bass Jonathan Howard.

The first half of the program, titled "Pater Noster," was organized around seven different settings of the Lord's Prayer. These ranged in style from Gregorian plainchant to Leonard Bernstein's rock-influenced version from his 1971 Mass. Between the different settings of the prayer — sung in Latin, English, French, and German — the group inserted numbers relating to certain words or phrases in the "Our Father." The half was performed mostly attacca, with only a few short pauses between works.

The concept was a clever, but the group programmed a bit too many polyphonic pieces by Renaissance composers. Schütz ran into Josquin, followed by Byrd, Palestrina, and Lassus. While these showed off some admirable balance and timbral unity on the part of the singers, it made for a stylistically monotonous first half. However, a few well-placed twentieth-century gems helped to vary the program a bit. These included the aforementioned Bernstein setting and an ethereal Lord's Prayer by John Taverner from 1999. Poulenc's "Quatre petites prières de Saint François d'Assise" (an appropriate text, considering the name of the venue) was especially lovely, with its jazz-tinged harmonies.

By paying close attention to which men were featured in the arrangements of these works, it was possible to get a sense of a kind of "pecking order" among the singers. Having sung with the group for two-and-a-half decades, first countertenor David Hurley is the undisputed leader of the King's Singers — which also means an abundance of solo passages. This is a bit of a shame considering that his voice is a bit past its prime. When compared to the bell tone of second countertenor Timothy Wayne-Wright's voice, Hurley's falsetto comes across as shrill and colorless. Wayne-Wright is often pushed to the side, but he shines in his solo moments, especially during the Schütz "Vater unser."

Moving downward range-wise, we have tenor Paul Phoenix, a 16-year King's Singers veteran whose experience in the group is only surpassed by Hurley. Phoenix has a strong, full-bodied middle range. Yet he lacks confidence when hitting high notes and relies too much on head-voice, which often sounds empty and breathy. This was apparent in his rendition of Bernstein's Lord's Prayer, which was the only entirely solo number of the evening. The King's Singers' website may provide some explanation for Phoenix's shortcomings: his voice type is labeled "Tenor (pushed-up baritone)."

Baritones Christopher Bruerton and Christopher Gabbitas provide a firm harmonic foundation for the group and seem more concerned with blending than with showing off. Yet it is impossible to ignore the pipe-organ profundity of Jonathan Howard's resonant bass. A new face in the King's Singers (he replaced long-time member Stephen Connolly in 2011), he is the most-promising of the six men, and he should have a successful career with the group.

After intermission, the ensemble offered a lighter fare of folk songs and popular pieces. In seven lively Catalan folksongs, the singers imitated drums and guitars with comical onomatopoeic syllables ("dum, dum," "tantaran," etc.). "La Pastoreta" ("The Shepherdess") called for some difficult Catalan patter singing, which the men executed with precision — not an easy feat considering the unfamiliarity of the language.

In contrast to the more upbeat folk melodies, "Villançico Catalan" was a hauntingly beautiful melody reminiscent of the famous French carol "Picardy" (often sung to the text of "Let All Mortal Flesh Keep Silent.") The arrangement was subtle and sophisticated, and eschewed the slightly cheesy "bum bums" of the six other folksongs. The text, which evoked fruit pickers singing of Jesus' birth, further emphasized one curious thematic relation between the folksongs — the majority of them were related in some way to the Nativity, suggesting that the program was left over from a previous King's Singers Christmas concert.

Following the folksongs were a few pop numbers, including the Beatles' "I'll Follow the Sun" (the countertenors felt a little out of place here) and Rodgers and Hart's "My Funny Valentine." The latter featured some impressive jazz vocals from the group as a whole, with sudden transitions into doo-wop, scat, and what seemed to be some improvisation. Tenor Paul Phoenix sounded more at home in this style of singing, and his solos in the song rivaled recordings of the great mid-century jazz crooners. Fortunately for fans of both jazz and the King's Singers themselves, baritone Christopher Gabbitas announced that "Valentine" would be released on CD as part of a Great American Songbook series of albums the group is putting together.

Considering the holiday, the Rodgers and Hart would have been an excellent finale. Yet the King's Singers was joined onstage by a local chamber choir for a programmed encore piece — "A Thanksgiving" by Oxford composer Robert Chilcott — begging the question of whether a work can really be called an "encore" if it is listed in the program. After hearing longwinded details of the piece's commissioning, the music itself was anticlimactic: bland, feel-good, and excessively tonal with absolutely no substance. Bearing in mind the high quality of the rest of the concert, the "encore" was the epitome of "too much of a good thing."